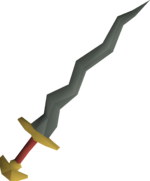 Osmumten's fang is a one-handed stab weapon obtained as a rare reward from the Tombs of Amascut. It was the weapon of Pharaoh Osmumten, who was a skilled hunter. It requires level 82 Attack to wield. A cursed phalanx can be attached to the fang to create Osmumten's fang (or), a cosmetic variant of the weapon.

The fang has two unique passive effects which aim to make it effective against targets with high Defence levels and more consistent overall: re-rolling accuracy on an unsuccessful hit and making damage rolls closer to the average. The special combat mechanics are described in more detail below. Like spears, halberds, and magic, the fang is also able to deal full damage to the Corporeal Beast.

A player attacks an opponent with Osmumten's fang.

Osmumten's fang has two passive effects, where it behaves differently at both stages of an attack. That is, when determining if a successful hit has occurred, and then how much damage is applied.

The first effect concerns the probability of landing a successful hit on an opponent, which differs depending on whether the weapon is used within or outside of the Tombs of Amascut raid.[1] Within the raid, this check is performed using the standard mechanics, but is repeated; if either check succeeds, a successful hit has been made.

When determining if the attack lands outside the raid, two independent accuracy rolls are made and if either is higher than the opponent's defence roll, the attack succeeds. To calculate the exact probability, the following formula can be used (where

represents your maximum attack roll and

The second effect involves using a different formula to determine damage rolls; unlike other weapons that roll between zero and the maximum hit of the player upon a successful hit, the fang will instead always deal between 15% and 85% of the maximum hit upon a successful hit, except when making use of the weapon's special attack. For example, if the fang's true max hit was 60, it would roll between 9 and 51 instead of 0 and 60 (inclusive) damage upon a successful hit. While this effect does not increase the expected damage per second, it does have the effect of lowering the overall variance of the damage output.

Osmumten's fang has a special attack, Eviscerate, which consumes 25% of the player's special attack energy. The attack provides a 50% increase to accuracy for the next hit, and uses the fang's true max hit when determining damage rolls. For example, if the fang's true max hit was 60, it would roll between 9 to 60 damage upon a successful hit, rather than the usual 9 to 51 damage it would normally roll.

The fang currently samples the brine sabre special attack animation. Despite the animation, it rolls against the opponent's stab defence if the attack style is set to stab.