Otherworldly beings are unusual Zanarian monsters. They are commonly assigned as Slayer tasks by Vannaka. They are found south of the bank in Zanaris and can be safespotted by standing next to the flower pond and attacking the ones on the other side. Be wary, they do move around quite a lot and aren't easy to safespot.

More specifically, five of the six otherworldly beings have a wander radius which permits safespotting without having them retreat as long as you stand right next to the pond. One of these five will retreat if attacked horizontally across the pond, and another will retreat when attacked vertically. The other three will not retreat as long as you stay next to the pond.

Otherworldly beings may be a decent source of Magic experience, herbs, runes, and the materials for rings of forging for Ironmen. 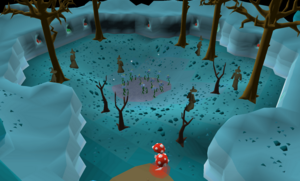 Otherworldly beings in their natural habitat.

The average Otherworldly being kill is worth 256.08.