From Old School RuneScape Wiki
Jump to navigation Jump to search
The RuneScape Wiki also has an article on: rsw:Ourania Cave
For information and tips on the Runic altar located here, see Ourania Altar.

The Ourania Cave is a dungeon that houses the Ourania Altar, which is the cave's main point of interest. The cave is found north of the Scorpius Shrine (west of the Battlefield and south of West Ardougne).

The cave is currently controlled by the Zamorak Magical Institute (or ZMI). The ZMI have invaded the cave and taken over the short route to the altar, which they aggressively guard against anyone else.

Just inside the cave, players can speak to Eniola to access their bank at the cost of 20 runes (of any type) per use. Players can also set up a quick-deal payment with Eniola to pay 20 of a chosen rune to instantly use the bank. 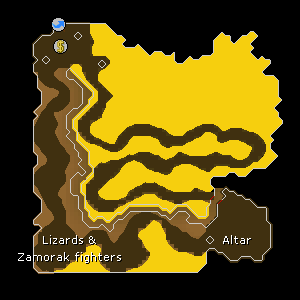 The Ourania Runic altar found in this cave has the power to turn pure essence into any type of rune (except combination runes and wrath runes). Each rune crafted grants the crafter twice the normal amount of experience that would have been gained by using any other Runic altar. As a result, this dungeon is a popular place for Runecrafters to gain experience.