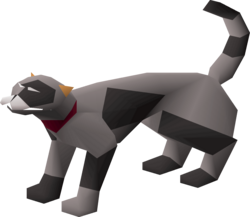 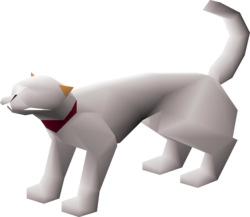 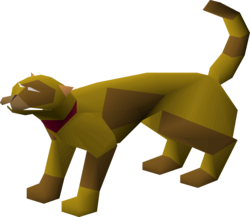 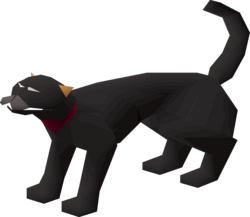 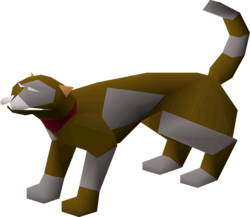 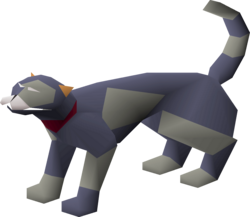 Overgrown cats are pet cats that the player has continued to grow after becoming an adult cat. After 5-6 hours of following the player, a regular adult cat will become an overgrown cat, and will lose its ability to catch vermin.

Overgrown cats may be spoken to with a Catspeak amulet, or without it after partial completion of Dragon Slayer II. After Icthlarin's Little Helper, an extra dialogue option is added which allows the player to review some events of the quest.

Players can sell their regular, overgrown, wily and lazy cats to civilians in West Ardougne in the south-western area of the city for 100 death runes (18,100). This increases to 200 death runes (36,200) with the easy Ardougne achievement diary reward. Use the pet cat on the civilian in order to make the trade. Hellcats do not need to be transformed back to normal cats before being traded in.

After the completion of the Ratcatchers quest, players can speak to Felkrash to have her train their overgrown cat into a wily cat.

When fighting Hell-Rat Behemoths, the King rat or in the Rat Pits, overgrown cats have the following combat stats:[1]