The Party Room is a building in north-east Falador, primarily used by players to host drop parties. The official world for it is 305 (P2P); however, worlds 301 and 302 can often have more activity.

Players can donate items to the Party Chest, but cannot withdraw them again. 216 individual items can be put in, before the chest is full. Pulling the lever next to the chest for 1,000 coins will cause balloons to float down around the Hall. Popping these balloons may yield an item from the chest. This, and the bar upstairs, makes the Party Hall a popular place for drop parties.

The owner of the Party Room, Party Pete is a fun-loving character. He will dance, chat, and give you a book titled Party Pete's Bumper Book of Games. He will also remove 'cheap' items from the Party Chest.

Pulling the lever near the Party Chest will give a player the option of summoning the dancing knights for 500 coins. The knights will dance on the tabletop, singing a song in homage to a similar scene in Monty Python and the Holy Grail. The reference to the movie is further expanded upon in a dialogue with Party Pete, who says that the knights of Camelot got it into their heads that the Party Room knights were making fun of them.

Postie Pete frequently visits the Party Hall. Players can converse with him one at a time.

The NPCs in Falador, such as the bank staff and the guards, react with excitement when a party is in progress. One of the phrases said refers to "high value items", but it is hard to tell if that is true. You must add 50,000 coins of value to the chest for a free-to-play world for the NPCs start shouting "Something is happening in the party room!" 76,000 of value is required for members' worlds.

The NPC chat only appears on the main screen, not in the chat box.

The Party Room contains a museum of past Old School RuneScape updates, accessible by climbing down the staircases. Each gallery contains displays of past updates, with the examine text stating their date of release. 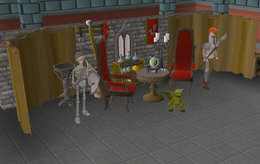 The cover of the handbook recreated in game.
Retrieved from ‘https://oldschool.runescape.wiki/w/Falador_Party_Room?oldid=14088485’
Categories:
Hidden category: