Paterdomus, or Temple of Saradomin, is the temple marking Misthalin's eastern border. It acts as the gateway into Morytania and is located in eastern Silvarea on the River Salve. The priest Drezel is the owner of the temple, although it also plays host to some unwelcome Monks of Zamorak, as discovered in the Priest in Peril quest. It is labelled "Paterdomus Temple" on the world map.

Long ago, the Seven Priestly Warriors held back the forces of Lord Lowerniel Vergidiyad Drakan and sanctified the River Salve, thus preventing the hordes of Morytania from being able to cross over and invade Misthalin. The Paterdomus Temple was then built on the site of this famous battle.

During the Priest in Peril quest, it is discovered that the temple has been taken over by Zamorakian monks, who are working on a method to take down the barrier on the Salve. 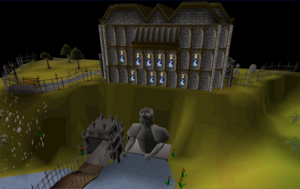 The backside of the temple, including a statue honouring Saradomin by the River Salve.
The mausoleum dungeon under Paterdomus lies just north of the temple. 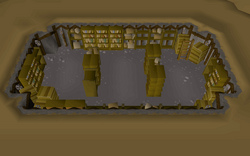 Drezel's secret library found in In Aid of the Myreque.

The basement of the Temple is only accessible if you have started the Priest in Peril quest. Players must defeat the temple guardian by the entrance before they can proceed through the basement. During the In Aid of the Myreque quest, players unlock a secret library filled with books.

The ground floor[UK]1st floor[US] of the temple has been captured by Monks of Zamorak. For killing these, you will receive only 25% of normal experience. Also on this level is an altar. Just outside of the temple is an Agility shortcut requiring 65 Agility.

Monks of Zamorak can be found on the first two floors of the temple. For killing these, you will receive only 25% of normal experience.

During Priest in Peril, Drezel is held captive on the 2nd floor[UK]3rd floor[US] and is freed during the quest.

The Paterdomus Temple also plays a role as the finish line in the Temple Trekking / Burgh de Rott Ramble mini-game for villagers and a starting point for mercenaries.

The Odd Old Man really has something for bones, and even stranger about him is the talking sack on his back. He might even like you to collect bones for him in the Rag and Bone Man I quest. His house can be found at the end of the northern central path.

Just outside the Odd Old Man's house is a limestone quarry (Silvarea Mine). Using the Crafting skill these can be transformed into limestone bricks, which are used in many quests and in Construction.

Various quests involve or take place in Paterdomus temple. These include: