The only item required to mine is a pickaxe. A certain Attack level is required to wield one, but players are still able to use the pickaxe to mine without the Attack level requirement. Players should use the best pickaxe available for the fastest mining speed.

Using an infernal pickaxe is recommended if using the fastest training methods. Mining rocks with it will give a 1/3 chance for the ore to automatically combust, which will consume the ore. This reduces the number of ores that need to be dropped, and also grants some passive Smithing experience. Making an infernal pickaxe requires level 85 Smithing, and it can be charged with dragon pickaxes or smouldering stones. The latter are usually cheaper, but using the infernal pickaxe can still be somewhat expensive for some players.

For other methods, the crystal pickaxe performs better, and it should be used if the player has enough crystal shards for it.

The Prospector kit obtained from Prospector Percy in the Motherlode Mine provides a total of 2.5% bonus Mining experience when worn. The outfit is not worth getting timewise if the player is going for 99 Mining using the fastest methods. However, it is a requirement for a master clue step and a hard task in the Falador Diary, so the player might want to get it anyway.

The full set costs 180 nuggets in total. Getting all the nuggets needed would take somewhere around 10 hours on average.

The Varrock armour 4 also works as a prospector jacket.

Wearing a celestial ring, obtained through the Shooting Stars activity, provides an invisible boost to the Mining skill. This will boost experience rates slightly. The uncharged ring is worth getting if the player is going for level 99 Mining using the methods below.

There are also mining gloves available in the Mining Guild, but they do not bring any benefits when using the training methods below.

To gain Mining experience most efficiently, players should always drop the ores they mine (also known as "powermining" or "dropmining"). This can be done by holding the shift key and clicking on the ore once shift drop has been enabled in the options. Mobile users can toggle the tap-drop option.

Early levels can be skipped by completing quests that give Mining experience. Completing Doric's Quest, The Dig Site, Plague City, The Giant Dwarf, The Lost Tribe and Another Slice of H.A.M. grants a total of 27,525 Mining experience, which will get the player from level 1 to 37. All of these quests have fairly low requirements, and completing them allows the player to use an adamant pickaxe right from the start.

From level 1 to 15, players should mine copper or tin. This can be done anywhere, though the Lumbridge Swamp mining site is debatably the easiest due to its relative lack of players and aggressive monsters, and its collection of copper and tin rocks.

Mining iron in the Mining Guild.

Mining iron offers the fastest experience from level 15 to 45. At level 45, 3-tick mining granite becomes faster assuming good performance, however this method is much easier and offers relatively fast experience at higher levels. Players who are inexperienced with tick manipulation methods, or do not plan to use tick manipulation at all, are advised to mine iron up to level 70.

Wearing Varrock armour 1 or higher increases the overall experience rate for this method, as it gives the player 10% chance to mine 2 ores at once while worn.

From level 15 to 60, players should mine iron at a location that has three iron rocks in a triangle, as such a formation that allows the player to mine all three rocks without moving. Drop the ores while waiting for the rocks to respawn. There are eight such locations available at this level:

If using tick manipulation, the best place to mine iron is in the Legends' Guild mine, which has 4 iron rocks close to each other in the eastern part. Start the 3-tick cycle with a herb and tar (or other suitable items) while moving between rocks, and drop the ores between mines. This method is faster than using a triangle spot, but because this method is much more advanced and significantly harder than using a triangle spot, it is only recommended for players who plan on 3-tick mining granite from level 45 onwards.

From level 60 onwards, the pay-to-play area of the Mining Guild becomes the best option, as the respawn time for rocks mined in this area is halved. This makes it so the players do not have to wait for the rocks to respawn or use tick manipulation; with correct timing and accurate clicks, players can drop the ore between mines and keep mining continuously.

3-tick mining granite (commonly referred to as "3t4g", 3-tick 4 granite) at the Quarry offers the fastest Mining experience in the game. However, this method is extremely click-intensive and can be hard to learn. Tick manipulation must be used for this method, as without it the experience rates are significantly reduced and this method would not be worth doing. Players who are inexperienced with tick manipulation methods may find it worthwhile to train with iron to higher levels before attempting to train with granite, as mining iron still offers fairly high rates at lower levels.

The four granite rocks are located the south-west area of the Quarry. The fastest way to get there is to teleport with the Camulet to Enakhra's Temple, navigate outside and run a short distance south-west. After completing the hard tasks in the Desert Diary, players can teleport straight to the entrance instead. Players who have not completed Enakhra's Lament can use the Pharaoh's sceptre to teleport to Jaldraocht Pyramid and run west, or take the carpet to Bedabin Camp and run south.

Players must have some sort of desert heat protection in order to survive. Desert amulet 4 provides immunity to the desert heat while worn, alternatively wearing the Hitpoints cape along with a regen bracelet will outheal the damage taken from desert heat. If neither of those are an option, the player can bring waterskins and fill them with the lunar spell Humidify.

Wearing Varrock armour 2 or higher increases the overall experience rate for this method, as it gives the player 10% chance to mine 2 ores at once while worn. It is also strongly recommended to use an infernal pickaxe if the player can afford to use it, as it significantly reduces the amount of ores that need to be dropped and also provides passive Smithing experience. One fully charged infernal pickaxe lasts for around 900,000–1,000,000 Mining experience. Using a crystal pickaxe is not recommended for this method, as it does not bring any benefits or increase experience rates because of tick manipulation being used, and it costs crystal shards to use.

Players should drop the mined pieces of granite on the ground between mines. This is done by starting the 3-tick action and clicking on the next rock, quickly dropping the granite and clicking the rock again. This requires accurate clicking and some practice to perform consistently, but it is much more efficient than dropping a full inventory. It is recommended to use resizable mode, zoom in and turn the camera south so that there is as little distance from the inventory to the rocks as possible. Turning data orbs off is also helpful to prevent any misclicks when clicking on the southernmost rock. 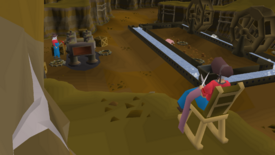 Mining in the Motherlode Mine is a slow training method, but it requires relatively low amount effort and offers somewhat decent profit at higher levels. Level 30 is required to mine there, but players are advised to use faster methods until level 55 or level 61, as the experience is very slow at lower levels due to receiving less experience from collecting the pay-dirt. At higher levels, this method is only recommended for players who are looking for an easy training method, as the Volcanic Mine minigame offers much faster experience.

The fastest way to get there is to use the skills necklace teleport to the Mining Guild, and run a short distance to the entrance. Players will need to have a pickaxe on them to clear the obstructing rockfalls to be able to enter deeper into the mine.

Completing the medium tasks of the Falador Diary is recommended, as this grants the player access to a shortcut (requires level 54 Agility) to an area which is near the bank chest and relatively close to the hopper. Completion of the elite diary will also increase the chance of receiving higher-level ores.[1]

Players can obtain golden nuggets through cleaning pay-dirt, which can be used to purchase perks and rewards from Prospector Percy. The most notable reward is the Prospector kit, which adds a bonus 2.5% experience while mining. Having all the parts from the prospector kit is a requirement for completing the hard task set of the Falador Diary. Once the player reaches level 72 and has 100 golden nuggets, it is recommended to unlock the upper levels of the mine. The upper levels have more concentrated ore veins compared to the lower level, and they deplete after they have been mined for a set amount of time, unlike in the lower area, where it's a random chance per pay-dirt mined, making one vein last longer on average.

For more up to date calculations on profit per hour, see Motherlode Mine.

Mining gem rocks offers relatively fast experience and decent profit. Gem rocks are also the fastest method on average to obtain the rock golem pet, and the only viable source of opal, jade and red topaz, which is particularly useful for ironmen.

Players will need to have completed the hard tasks of the Karamja Diary for access to the underground portion of the Shilo Village mine, which has many gem rocks and a bank deposit box nearby. Without the diary completion this method is not worth doing, as the surface area has much fewer rocks. Players will also need to wear an amulet of glory with charges, as this increases the chance of successfully receiving a gem. Using tick manipulation is recommended, as this increases experience rates and profit per hour. 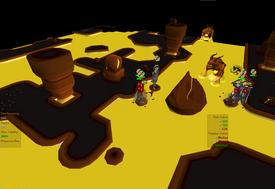 The Volcanic Mine minigame on Fossil Island offers relatively fast experience and it requires low amount of effort to participate in. However, it requires coordinated teamwork and it does not provide any significant profit. Level 50 is required to enter the mine, but it is recommended to use faster methods until level 70 as the experience is notably slower below that level.

To enter the mine, players must have completed the Bone Voyage quest, have earned at least 150 Kudos and have claimed the five unidentified small fossils from Peter after fully building the Museum Camp. Players must also pay Petrified Pete 30 numulites every time they wish to enter the mine. Over time, players will slightly profit numulites in the mine, however.

The official world for this minigame is world 323, although it is recommended to search for a team — the Minigame Group Finder includes a clan chat for Volcanic Mine, where players may be found making groups. Having 3 to 5 players in a team is optimal, although duo is also viable. It is also possible to participate in the minigame entirely solo, but it requires much more effort and practice, and the experience rates are slightly slower than in a team. 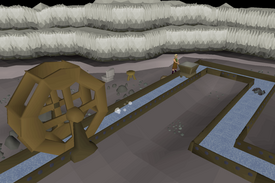 Blast mining requires dynamites, a chisel, and a tinderbox. Wearing weight-reducing clothing (such as the graceful outfit) and a charged ring of endurance is recommended to reduce run energy drain. Players may also need to drink stamina potions to restore run energy. Having a pickaxe is not necessary, but the dragon pickaxe's special attack can be used to temporarily increase the current Mining level to have a higher chance of receiving better ores. The Prospector kit can be worn for extra experience when collecting the ores from the operator.

Amethyst is an alternative choice for players looking to mine with low effort or click intensity, albeit for very slow experience rates. At high Mining levels, players can expect to mine from 80 to 100 amethyst per hour, for approximately 20,000–25,000 experience per hour and 270,000–330,000 profit per hour.