From Old School RuneScape Wiki
Jump to: navigation, search
This article is about the pay-to-play guide. For the free players' guide, see Free-to-play Prayer training.

Training Prayer can be quite costly, but it is a very important skill due to its utility in combat. Many quests recommend having 43 Prayer, as this allows a player to use all available protection prayers. Level 70 Prayer is also an important milestone for Piety.

It is recommended to complete quests that give you Prayer experience. Completing The Restless Ghost, Priest in Peril, Recruitment Drive and Holy Grail will grant a total of 14,531 Prayer experience, which will elevate a level 1 Prayer to level 30 without doing any 'traditional' prayer training. Spirits of the Elid has more requirements but gives another 8,000 Prayer experience.

A very common and a fast method to train Prayer is to offer bones of any sort at a gilded altar with two incense burners lit in a player-owned house. The most popular options are dragon or wyvern bones, there is no benefit from using dragon over wyvern, or vice-versa, although by having the choice of buying both you are able to stack a greater quantity within the buy limit. They have a high supply in the Grand Exchange, offer relatively fast experience and are significantly cheaper to use than the higher-tier bones (such as dagannoth or superior dragon bones). Despite the fact that this does not give as much experience per bone as the Ectofuntus, many more bones can be processed in less time, making the experience per hour higher at a slightly higher price to the player.

The fastest way to do this is in a PvP world, as you can use a bank chest near Camelot Castle which is the closest bank chest to a teleport. The chest is within a safe area so no player killers can attack you there. Equip a dust battlestaff, withdraw two marrentills, a tinderbox, 24 bones and law runes for teleportation. Teleport to your house, light the incense burners (note that this requires 30 Firemaking) and manually use each bone at the altar to speed up the process. Teleport back to Camelot and repeat.

Players who don't have the Construction level to build a gilded altar can look up for house party hosts. Currently, this takes place on World 330 at the Rimmington house portal and the Yanille house portal. If the host is in Rimmington, you can take noted bones and un-note them by using them on Phials for 5 gp per note.

If you have completed the aforementioned quests, you will need 51,656 dragon or wyvern bones to get from level 32 Prayer to 99. 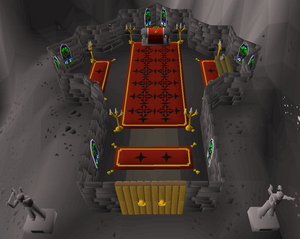 The Chaos Temple in multi-combat level 38 Wilderness contains an altar which grants the same experience as a gilded altar with two burners lit, but also gives a 50% chance for the bone not to be consumed, effectively doubling the amount of experience received per bone. This is recommended for Ironmen, as it effectively requires getting half the bones that would be otherwise needed, and also for those who seek to save money on Prayer training.

However, using the altar comes at the risk of having to face player killers who frequently like to hop between worlds at the location. Players can take noted bones and un-note them here by using them on Elder Chaos druid for 50 coins per note. While convenient, this also increases the amount that the player is risking to player killers.

The easiest way to get to the chaos altar is to use a burning amulet's teleport to Lava Maze entrance and run south-west. However, the spot can be often crowded by player killers due to its proximity to Revenant Caves and King Black Dragon Lair, so an alternative and likely a safer way to get there is to use Ghorrock Teleport on Ancient Magicks and run south, or Cemetery Teleport on the Arceuus spellbook and run north. Alternatively, players who have an Ancient Obelisk in their player-owned house can use it to teleport to level 44 Wilderness and then run south.

Experience rates vary depending on the bone used and amount of player killers. It is recommended to use the faster training method of using bones one-by-one on the altar to both increase the experience rate and leaves less time for players to kill you. One can expect to get around 500,000 experience per hour using dragon or wyvern bones, and 1,050,000 experience per hour using superior dragon bones. Rates can be increased drastically by running bones on an alternative account (which also reduces the risk somewhat), however this adds a lot of extra effort.

Players of all levels often choose to travel to the altar from the bank for every inventory of bones. While this hampers experience rates, it is often preferred for reducing the amount the player is risking. Players will typically bring three items (such as a bulwark, burning amulet, and a Locator orb or Dwarven rock cake) or less, and a full inventory of bones. When all of the bones are depleted, players reduce their health as much as they can with the rock cake/orb before killing themselves with the nearby Wine of zamorak or Chaos Fanatic. The spawn point closest to a bank is Edgeville.

Note: This is only really viable for either very high-level or very low-level players.

High level players should wear cheap defensive gear while 3- or 4-iteming more expensive armour pieces, and bring high-healing food (such as Saradomin brews along with super restores and manta rays) in order to survive against player killers. When choosing the equipment, the aim should be maximising Magic defence while having good defence bonuses against melee and ranged attacks. Dinh's bulwark is an excellent choice due to its massive defensive stats, however the elysian spirit shield is better if the player can afford one. If neither of those are an option, a dragonfire shield or a crystal shield are both more affordable alternatives, however they have significantly worse defensive stats than a Dinh's bulwark or the elysian spirit shield. If using an off-hand shield, wearing any elemental staff is recommended as they are cheap and provide +10 Magic defence bonus. serpentine helm's defensive stats are comparable to Barrows helmets and it provides immunity to poison and venom when worn. An imbued ring of suffering provides +20 defences all around, which (along with a black d'hide body) provides better defence bonuses overall than Armadyl chestplate or Karil's leathertop. If 4-iteming, black d'hide body should be replaced by Armadyl chestplate or Karil's leathertop, but you will risk potentially getting smited and losing an expensive item. Amulet of glory is recommended for the neck slot, as it provides a teleportation out of Wilderness while not taking an inventory space. The rest of the gear should consist of cheap and/or easily replaceable items.

As the altar can also be used to recharge Prayer points, players can keep Protect from Magic and Augury prayers up while offering bones and pray at the altar when needed.

Very low level players (combat level 3-20) are often too low leveled to be targeted by player killers. Such players can usually bring higher amounts of noted bones with lower risk. However, some low level combat pure player killers can sometimes be found at the altar, so some caution should still be given. 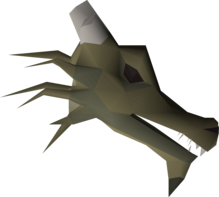 Players who have at least 60% favour in the Arceuus house can train Prayer by reanimating ensouled heads and killing the reanimated monsters near the Dark Altar. This method offers a slower but cheaper alternative to offering dragon or wyvern bones at a gilded altar. Depending on the player's combat level, gear and the type of head used, the player can expect to reanimate around 160-220 ensouled heads per hour.

Players can quickly travel to the Dark Altar via nearby fairy ring (CIS), which can be accessed via the quest point cape's teleport to Legends' Guild, or teleporting to Salve Graveyard and running north-east to the fairy ring. Players with high Construction can also use a fairy ring in their house and restore their stats by using an ornate rejuvenation pool. Alternatively, players can simply equip an amulet of glory, bank at Edgeville and run to the nearby fairy ring to the east.

Having a rune pouch is recommended since it saves inventory space, allowing you to reanimate more heads per trip. Buying ensouled heads in advance is recommended if you plan to train for an extensive amount of time, most ensouled head types have a low volume of trades on the Grand Exchange.

Currently, training with ensouled bloodveld heads can give roughly 145,000-180,000 experience per hour depending on your combat level. In addition, this method can give up to 30,000 Magic and combat experience per hour. With higher Magic levels, upwards of 300,000+ Prayer experience per hour can be achieved, along with the added Magic and combat experience. The highest-tiered head is dragon, at level 93 magic, which including the cost of runes is still cheaper than dragon bones on a gilded altar, saving upwards of 30 million using current Grand Exchange prices. They are not very difficult for medium-to-higher level players to defeat as every reanimated creature has a fixed amount of health, between 5 and 35. The reanimated creatures keep some of their original mechanics. Bring anti-poison when fighting reanimated kalphites or dragonfire protection when fighting reanimated dragons. Reanimated aviansies can not be fought by using melee and reanimated abyssals require 85 slayer to damage.

For information about the cost per experience, see Calculator:Prayer/Ensouled heads

The Prayer experience rate calculator attempts to calculate how quickly a player can "earn" experience points for each bone type, depending on the location where they are performing the task.

For information about the cost per experience, see Calculator:Prayer/Bones