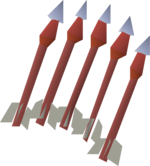 Pearl dragon bolts (e) are pearl dragon bolts that are enchanted via the Enchant Crossbow Bolt (Pearl) spell by a player with level 24 Magic. The spell enchants 10 bolts per cast, and uses 1 cosmic and 2 water runes.

Enchanted pearl dragon bolts have a chance (6%) of triggering the Sea Curse effect. This will cause a mighty bolt of water to hit the opponent. This ability is negated by opponents wielding water staves, but increased by opponents wearing fire staves or fiery monsters. The effects of these bolts seem to be the opposite of enchanted dragonstone bolts.

The Sea Curse effect affects damage only, adding 1/15 of the player's Ranged stat to fiery units, and 1/20 against other targets; ranged boosts are taken into account as well. The fiery units affected are:

If the player has completed the Hard Kandarin Diary, there is a 10% increase of the likelihood that the special effect of an enchanted bolt will occur (to 6.6%). This effect is always active regardless if the headgear is equipped.