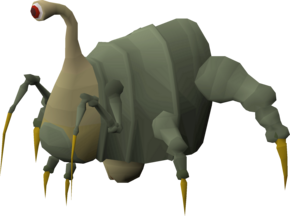 The Penance Queen is the boss monster of the Barbarian Assault minigame. She spawns in Wave 10 after all monsters are killed, or alternatively after a 4 minute delay if not all monsters are killed. She uses ranged attacks in rapid succession that can easily hit up to 13, and simultaneously strikes all players fighting her. Her melee attack can also hit up to 13. Players may not use protection prayers whilst fighting her. She can easily wipe out a whole party of players, especially if there is no cooperation between team members.

She can only be harmed by omega eggs, which are made through a 4-step process and shot from the egg launcher. It takes at least 8 omega eggs to take her down.

Upon defeating her, players will receive 80 Honour points in their chosen class, as well as 5 points in all other classes. Also, players may now trade items to Commander Connad on the ground floor of the Barbarian Assault building. Previously, this was not the case.

Since the Queen is located within a "safe" activity, you will not lose any items if you die when fighting her, though you will have to restart the wave.