Penguins (Spheniscidae callidus) are a race of flightless aquatic birds found in Gielinor, specifically in the north, the Penguin 'Motherland', and other islands. Penguins are one of Andrew Gower's favourite animals[1], revered in a manner similar to Bob the Jagex Cat, and have therefore been included in many aspects of RuneScape. A notable item honouring penguins includes the penguin mask, which is obtainable from medium clues in Treasure Trails. Penguins originate from the Motherland, its capital being Palingrad.

While some penguins, such as those found on an island near Miscellania (accessible via fairy ring code AJS), are apparently benign and unintelligent, presumably not part of The Pescallion's organisation, the penguins found on the Iceberg have organised themselves into a cunning and militant organisation known as the Killer Gentoo Penguins, or KGP, led by The Pescallion. One of his sons, Pescaling Pax, rules the Iceberg. Their goal is to destroy all humans and take over Gielinor. They are incredibly adept at technology, and they have created advanced infrastructures and a number of disguises like the "Thing" found in Fred the Farmer's sheep pen. 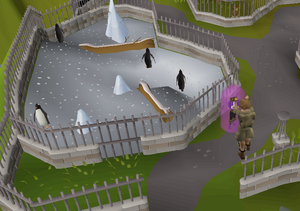 KGP agents in the Ardougne Zoo.

Penguins are the central focus of the Cold War quest. During said quest, players meet Larry, a zookeeper at the Ardougne Zoo who, after years of observing the penguins, suspects that they are evil. The player helps Larry study the penguins and infiltrate the Killer Gentoo Penguins headquarters on the Iceberg and uncover their intent to invade the world. The player narrowly escapes with their life.