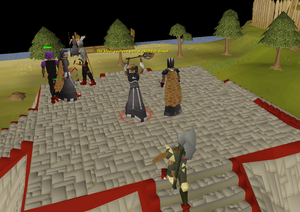 Pest Control Island is the island which plays host to Pest Control. It is the southernmost point of Gielinor and it can be accessed by the boats at Void Knights' Outpost.

The island has 3 different doors which head towards the middle of the Pest Control arena. The area is under control by the Void Knights, worshipers of Guthix. In the Pest Control minigame, the island is transferred into a battle zone for the players.

This island was originally owned by Marimbo (but for what purpose is unknown). Eventually the island was abandoned. Then the Void Knights discovered this island full of pests, which now named the mini-game which takes place on it, Pest Control.

Pest Control (often known simply as PC) is a co-operative members-only combat-based minigame. Players must defend the Void Knight from an onslaught of monsters, while at the same time destroying the portals from which the monsters spawn.