From Old School RuneScape Wiki
Jump to: navigation, search
The RuneScape Wiki also has an article on: rsw:Chick'arra
Kree'arra Jr. 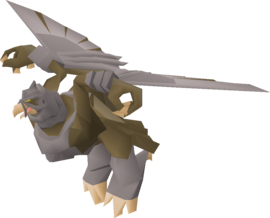 The Pet kree'arra is a pet dropped by Kree'arra. It is a much smaller version of Kree'arra.

Upon completing the dialogue with this pet, it will trigger the death animation of Kree'arra and disappear for approximately 5 seconds before reappearing in the same place.

This dialogue is only triggered when Kree'arra Jr. is battling another pet in the arena in the Menagerie.