Rocks can usually find their own food, and don't often need attention, so rocks are a good choice for a pet. The pet rock is held in both hands, although it cannot be used as a weapon; unarmed attacks are instead used while the pet rock is equipped. The pet rock does not confer any stat bonuses or penalties.

Pet rocks will happily live in the cat basket or menagerie of a player-owned house. When dropped inside a house, it will responsibly stay in its spot, patiently waiting for the player to come back.

The pet rock is not lost on death, despite being a pet, and instead goes to the player's gravestone.

In The Fremennik Trials quest, it is used to convince Lalli to give you some of his golden wool. A pet rock, cabbage, onion, and potato are the ingredients to make rock soup to please him.

Unlike most pets, the pet rock will not follow the player when it is dropped, possibly due to the rock's shy nature. Because of this, it can be used to substitute a player while attempting to open the two-man doors in the Waterbirth Island Dungeon. To get further into the dungeon, a partner has to destroy the door-support from the other side of the ladder, although a special attack of a rune thrownaxe can do this instead.

You try and feed the rock.

You stroke your pet rock.

Your rock seems much happier.

Your rock seems a little happier.

Want to fetch the stick, rock? Of course you do...

(Player puts the rock down and throws a stick which lands anywhere but forward. The rock will not move anywhere, because rocks naturally don't enjoy playing fetch. Player shrugs and picks the rock back up.)

(Player sets the rock down, and stand up for a few seconds. Then the player picks the rock up, and pets it.) 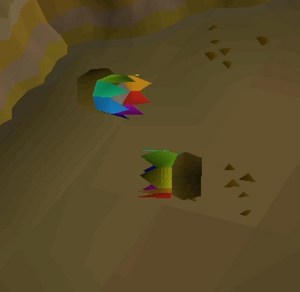