Petra Fiyed is an adventurer who briefly appears during the One Small Favour quest after defeating the Slagilith. She was trapped in a rock face after volunteering to do a teleportation experiment for Wizard Cromperty.

During the quest, the player must use the animate rock scroll to free her. Afterwards, she returns to Seers' Village, and is never found in game again. 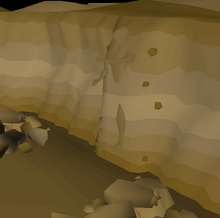