From Old School RuneScape Wiki
(Redirected from Pets)
Jump to: navigation, search
The RuneScape Wiki also has an article on: rsw:Pet 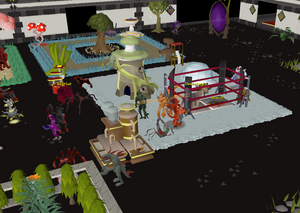 A pet is a non-combat NPC loyal to a player that is generally obtained from monster drops and skilling. Most pets can be interacted with. Most pets do not serve a purpose other than aesthetics, as most pets are very rare drops from certain bosses or skilling activities, and thus are often considered prestigious. A player may only have one pet following them at one time. Pets only move at a walking pace, if they become stuck and/or too far away from the player they follow, they'll teleport close to the player and continue. They can also be called to the player's side using the Call follower button under the Worn Equipment tab.

Receiving a pet
The sound which can be heard when players receive a one-off pet.

However, if a player receives a pet while having a follower out (for example, a cat), it will be placed into their inventory. When this occurs, the message in the chatbox will instead state You feel something weird sneaking into your backpack. If a players inventory is full and they have a follower already, they will not receive the pet. When skilling, the pet is prioritised over the resource gathered; it will be placed in the last inventory slot available,[1] while the resource gathered will be dropped underneath the player if their inventory becomes full. However, this does not apply to Farming due to the complexity of the skill's code.[2]

Players can still roll for pet drops even if they already own it. It does not affect their main drop, as pet drops are tertiary drops. When this happens, players will receive the message You have a funny feeling like you would have been followed... The only exception to this is the abyssal orphan due to being obtained differently compared to other pets.

If a player dies with a one-off pet following them (or if it is in their inventory and it is not one of the items protected on death) in a dangerous situation, the pet will be dropped and wander around the area for 30 seconds before despawning. Even if the player returns in time, the pet cannot be picked up. If the pet is not insured, players must re-obtain the pet as if they never had it. If insured, players can head to Probita and reclaim the pet for 1,000,000 coins. In order to insure a pet, the player must visit Probita and pay 500,000 coins. The player can still obtain the pet again from its respective drop source, and if the pet is re-obtained this way it will also be insured.

If a player runs out of membership with a pet still following them, the pet is placed in their inventory. They will receive the message Your pet is scared into your backpack.

. Base chances are found in the individual page of each pet. Players with 200 million experience in the corresponding skill will be fifteen times more likely in receiving the skilling pet.[3]

As the rates use the player's base level, temporary skill boosts such as the dragon pickaxe's special attack or invisible boosts in areas such as the Woodcutting Guild do not affect the rate at which players can obtain these pets.[4]