From Old School RuneScape Wiki
Jump to navigation Jump to search
This article is about Phosani. For the solo-only encounter of The Nightmare, see Phosani's Nightmare. 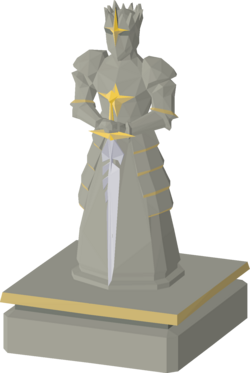 A statue depicting Phosani, the Justiciar of the Wolf, who later defected to Zamorak.

Phosani was a former Saradominist Justiciar, known as the Justiciar of the Wolf. Known by her knights as the White Wolf, in part because of her bright silver hair,[1] she was described as the most loyal and fiercest of Saradomin's followers, and the bastion against all evil.[2]

She was stationed in Hallowvale when the Zamorakian vampyre Lowerniel Drakan and his army attacked it during the Third Age. The kingdom of Hallowvale fell as Queen Efaritay was forced to surrender after the capture of her human husband, King Ascertes. Despite her loyalty to Saradomin,[3] Phosani felt abandoned by Saradomin following this crushing defeat, and she, along with her closest companions, Insela and Otrava, decided to desert Saradomin and swore allegiance to Zamorak and Lowerniel Drakan. Phosani and her companions went before him, and the former offered her remaining troops as blood tithes and thralls for the vampyres. The sacrifices were accepted by the Drakans, and Phosani and her companions became part of the new regime in the Sanguinesti Region.[4]

Afterwards, Phosani and her companions founded a town just east of the vampyre's new domain in an old hermitage. Here she founded The Sisterhood, and was given the title of "Mother", though she was known as "The Inquisitor" outside of the order.[5] Eventually, Otrava discovered a potion called the Elixir of Everlasting, which supposedly granted eternal life, and as Phosani desired to live as long as her vampyre masters, she, along other high-ranking members, drank it.

Although it seemed that the potion sustained those who consumed the elixir, soon it showed its drawbacks: those who consumed it would sleep for longer and longer periods, until they remained in a state of eternal slumber. When at last Phosani entered that state, her possessions, which included her armour and mace, as well as her body, were moved deep into the Sisterhood Sanctuary, per the laws set by herself.[6] The townsfolk were horrified about what happened to Phosani, and dubbed their town "Sleep" (which eventually became Slepe). 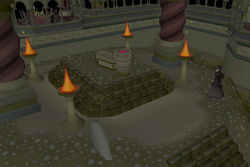 Phosani remains asleep in her coffin after many years.

At some point after Phosani was taken to the sanctuary, the Sisterhood decided to seal the entrance, only allowing it to be opened once their Mother wakes up.[7] However, the sealed Sanctuary was eventually opened by Shura, a siren from the Wushanko Isles, after a malevolent entity known as The Nightmare, invaded the sanctuary to feed on the dreams of Phosani and the people of Slepe, who are suffering from the Sleeper Plague.[8]

With the Sanctuary open, and more adventurers battling the Nightmare, it began to focus on Phosani's mind, generating a stronger nightmare from her dreams. Her coffin is also revealed to be the one directly above the Nightmare's physical body, with Sister Senga tasking adventurers to help Phosani fend off the Nightmare. With the adventurers' help, Phosani was able to repulse the Nightmare, albeit temporary.