From Old School RuneScape Wiki
Jump to navigation Jump to search
The RuneScape Wiki also has an article on: rsw:Pillars of Zanash
This article is about the scenery object in Witchaven. For other uses, see Pillar.

The Pillars of Zanash are a shrine to Saradomin found in the vicinity of East Ardougne and Witchaven. The pillars, known to be made of marble,[1] are mentioned by name only in the Tourist's Guide to Ardougne, found in the real-estate agency within the city, though it incorrectly states they are found west of Ardougne.

According to Brother Maledict, the shrine is over 150 years old, and predates the founding of Witchaven.[2] When the village came into being, the shrine was abandoned and has fallen into disrepair.[3] In addition, Mayor Hobb (while possessed by sea slugs) says that the shrine is "ancient beyond knowledge" and that its history should not be overlooked.[4] 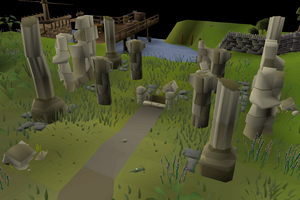 The entrance to the Witchaven Dungeon, surrounded by the pillars.