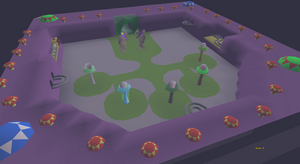 A player playing a game of Pinball. 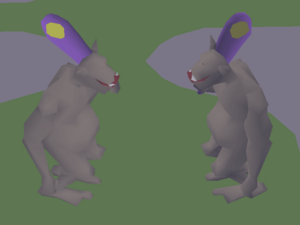 Pinball is a random event where the player is transported by Flippa to a strange room with five pillars, each with one rune on top, and two trolls, Tilt and Flippa, wielding large clubs.

The goal of the game is to tag each pillar that has glowing rings around it. This scores the player one point. After the player has scored ten points, they are free to leave through the exit. If a pillar that doesn't have the glowing rings around it is tagged, the score is reset to zero, and the player has to try again. The five pillars contain five spinning tops with fire, water, earth, air, and nature runes respectively.

Following an update on 8 November 2018, players may now leave the random event at any time by clicking the exit. Prior to this change if the player tried to leave before reaching ten points, they would be teleported in front of Tilt and Flippa, who knocked the player back onto the pillars and reset the score.

Drop rates estimated based on 5,494 rewards from the Drop Rate Project, unless otherwise cited.

The average Pinball event reward is worth 2,742.7.