The Pirates' Cove is a small island located in the Lunar Sea north of the Fremennik Province. It is the current docking place of the Lady Zay, a massive pirate vessel known for its unlawful activity in the region. The player is first taken to the island by the Fremennik pirate Lokar Searunner during the Lunar Diplomacy quest, and may visit it again at any point afterwards by speaking to Lokar at the port in Rellekka.

The island is totally uninhabited except for a number of hostile semi-intelligent moss giants. A number of pirates can also be found wandering the island, although they are presumably crewmen aboard the Lady Zay and not permanent residents. Although the Lady Zay's crew typically appear to remain onboard their ship whenever possible, evidence of their activity on the island is obvious; supply crates, basic fences, flags, and other materials can be found dotted around the area, and a number of skeletal corpses can be found hanging from poles on the island's peak.

The Pirates' Cove is an effective place to kill Moss Giants. Relatively few players are aware of the island's existence, and as a result it is typically not overly crowded. The Lady Zay is also docked here, and can be used to travel the rest of the way to Lunar Isle upon reaching a certain point in Lunar Diplomacy. 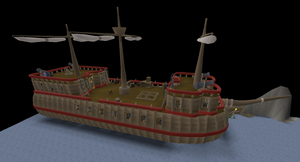 The Lady Zay, a pirate vessel known to dock at the cove.

The Pirates' Cove has virtually no recorded history. The island's isolated location and hostile environment suggest that very few, if any, civilised races have lived permanently on the island at any time. The moss giants that inhabit the island are largely unintelligent, and so it cannot be determined how they came to live on the island or how long they have been there for.

The cove's location appears to be unknown to most of the Fremennik people, and as such it has presumably played a relatively minor role in the region's development. It was not until very recently that the island was settled on a more permanent basis. In the Year 169 of the Fifth Age, the famed Southern Sea pirate leader Captain Bentley settled upon the island, using the area as a permanent port of refuge. In 169, Bentley and his crew stole the Lady Zay from an eastern Karamja Shipyard. Unbeknownst to the Shipyard's workers, the ships they were building were actually to be used by the anti-human gnome extremist, Glough. The Lady Zay was the only known ship ever finished as part of Glough's order, and upon its completion Bentley and his crew boarded and stole the vessel.

Bentley took the Zay to the Lunar Sea, presumably by way of the Eastern or Western Seas. The Customs and Excise Office, which maintains virtually no presence in the Lunar Sea, quickly abandoned any possible efforts to reclaim the ship. Bentley eventually had the ship docked at what would come to be known as the Pirates' Cove. To accommodate the ship's presence, a massive dock was constructed on the cove's south-eastern side.

Bentley has since used the cove as a safe haven from regional law enforcement and as a launching point for a number of attacks on small settlements and vessels in the Lunar Sea. The Lady Zay has also used the cove as a starting point for forays into the icy wasteland of Acheron to the north, although its purpose for doing so remains largely unclear. Because the Lady Zay's crew is relatively non-violent by pirate standards, and because Rellekkan law permits certain raids in the Lunar Sea, it has generally been permitted to dock in Rellekka for supplies. However, the cove still remains the Zay's primary docking point.

The cove's environment is extremely hostile. The island receives heavy snowfall year-round, and powerful easterly winds are known to sweep the area on such a regular basis that the few trees that manage to survive on it are permanently bent in an eastward direction. Very little flora or fauna is able to survive the cove's environment, and as a result the island is almost completely devoid of useful resources. Beyond a number of leafless trees, nothing can be found growing on the island.

The island itself is dominated by a steep incline on its northern side. This hill is too steep for the player to ascend, and as such only the island's southern side is accessible. The island's terrain is very rough and rocky, and a number of small unreachable islets and stone outcrops can be seen in the surrounding waters.

The Pirates' Cove can be accessed only by boat. Players may reach the island either by speaking to Lokar Searunner in Rellekka, provided they have completed the The Fremennik Trials quest (must start Lunar Diplomacy in order for Lokar Searunner to speak to you), or by talking to Captain Bentley on Lunar Isle, provided they have reached a certain point in Lunar Diplomacy. There is no fee either way.

There are no teleportation methods through which a player can immediately reach the island; however, players may reach the Lady Zay's port of call on Lunar Isle more quickly by using the Lunar Home Teleport or the Moonclan Teleport found in the Lunar spellbook, which is a reward for the Lunar Diplomacy quest. Players can also access Rellekka more quickly through a variety of means, including the enchanted lyre or teleport to house spell (provided their player-owned house is in Rellekka). 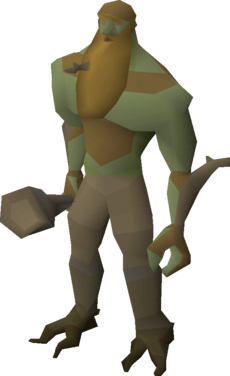 A moss giant, the cove's only native race.

The cove's primary attraction is its large moss giant population. The moss giants that wander the island are level 48, as opposed to their much more common level 42 counterparts. Moss giants are popular for their fairly high hitpoints and limited strength. They can also drop a number of potentially desirable items, including a variety of weapons, armour, gems, seeds, and herbs. The moss giants are aggressive to players level 96 and under. The nearest full banking facilities can be found on the Moon Clan settlement on Lunar Isle.

Because the cove requires partial completion of the Lunar Diplomacy quest and is fairly isolated, it is typically fairly devoid of players. Additionally, players do not actually have to visit the island during Lunar Diplomacy, and may complete the entire quest without ever stepping off the Lady Zay's dock. As a result, it is not uncommon for players who have completed the quest to be totally unaware of the cove's existence.

A number of other facilities can be found aboard the Lady Zay itself, including a range and several barrels containing potentially useful items such as swamp tar and cooking apples. Players can access the Zay by ascending via ladder to the top of the dock on the island's south-eastern side, either from the small islet on which Lokar docks his rowboat or the island itself.

With the exception of Lokar Searunner, the entire NPC population of Pirates' Cove exists aboard the Lady Zay. Lokar himself can be found near his rowboat, which is separated from the rest of the cove by the island's dock.