The Pirates' Hideout is a building located in deep Wilderness. A lockpick and 39 Thieving are required to pick the door lock, gaining entry.

Many aggressive pirates are located here. There are also 4 Thieving chests that have to be searched for traps before the player can loot them, and half of a redberry pie (5 hitpoints healing) spawns in the hideout. This is a single combat area.

It became inhabited by some of the former crew of Captain Bentley when their ship ran into a squall, which pushed the ship towards the rocky shore. Bentley himself and a few select men were able to escape in a small row boat, but the rest of the crew were washed ashore, as the ship was wrecked on the jagged rocks. The survivors then constructed the Pirates' Hideout, where they live to this day.

Some time after, the pirates allied with the witch Krystilia to kill Larran, a wealthy merchant who stores his possessions in two chests within the Wilderness. After succeeding, the pirates took Larran's big chest and stashed it on their ship. 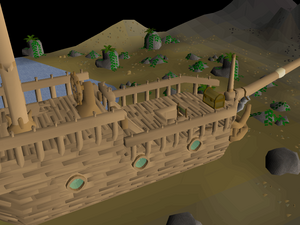 The pirate ship, where Larran's big chest is stashed.

While travelling to the Pirates' Hideout, for reasons such as Treasure Trails, it is somewhat safe to teleport to Deserted Keep east of the Mage Arena, using the Ardougne Wilderness lever west of the castle or the one-way lever in the ruins south of Edgeville. After cutting the spiderweb blocking the top of the exit from Deserted Keep, many players run south of the Mage Arena and swing back north to the hideout.