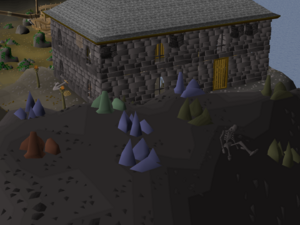 The Pirates' Hideout mine, or Pirates' Mine, is a mining site located east of the Pirates' Hideout in the deep Wilderness. It contains 1 iron ore rock, 4 mithril rocks, 1 adamantite rock and 3 coal rocks. Player killing in the Wilderness greatly increases the risk of mining at this site along with all Wilderness mines, so mining at this site can be very dangerous. There are also a number of giant bats around this mine. The closest bank is in the Mage Arena; however, players will need a sharp object (like a knife) to cut through the webs blocking its entrance.