Plague City is the first quest of the Elf quest series. The quest investigates a plague that has affected West Ardougne.

Items needed: Dwellberries, 4 Buckets of water, a spade, and a rope.
Edmond's location.

Talk to Edmond behind his house, next to the wall surrounding West Ardougne, north of the Ardougne Castle. Ask him what happened to his daughter and offer to help. He'll tell you to talk to his wife about getting some sort of protection against the plague. His wife, Alrena, is inside the house or wandering outside. She'll tell you she can make a gas mask if you get her some dwellberries. Give her dwellberries and she'll give you a mask. There are spare masks in the cupboard.

Make sure to take the Picture of Elena from inside the house while you're there.

Talk to Edmond again, and he'll tell you his plan to dig under the wall and get into West Ardougne. First, you'll need to soften the ground. Use your buckets of water on the mud patch behind his house (between the cabbages and potatoes). You can refill the bucket with the sink inside. Then use the spade on the softened ground. 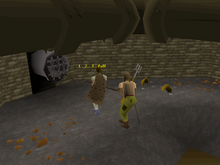 You'll fall under and Edmond will follow you down. Walk south to find a pipe blocked by a grill. After pulling on it to no avail, use a rope on the pipe, and talk to Edmond to pull the grill off. Put on your gas mask and climb inside to go into West Ardougne.

Once inside West Ardougne, talk to Jethick. He's just to the east (in the same plaza). Show him Elena's picture and he'll tell you to go check the Rehnison house and give you a book that he borrowed from them. Go north to the house sitting right up against the edge of the wall, as shown on the map. The grey planks of the building set it apart. They'll let you in when you mention you have the book. Once inside, talk to Martha Rehnison or Ted Rehnison, then go upstairs and talk to their daughter, Milli Rehnison, who'll tell you more about Elena's disappearance and whereabouts. Leave and go south past the town square near the southern wall to find the house with the big black "X" on the doors and a stairwell in the middle going down, marked with a black box on the map. Attempt to open the doors; the Mourners won't let you in because it's been hit hard by the plague. Tell them that you're looking for a kidnapped girl, and they'll tell you you need permission from Bravek to enter the house. 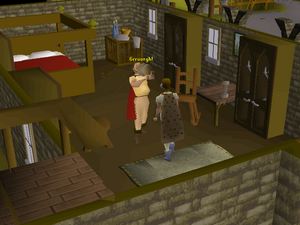 Go back to the town square and into the large building on the north side, north of the manhole. Ask the clerk who is through the door, then tell him This is urgent though! Someone's been kidnapped!, and he'll let you inside to see Bravek. He can hardly talk to you however, as he's badly hung over. He'll give you a scruffy note with a recipe for a hangover cure. To make it, put the chocolate dust into the bucket of milk, then add snape grass (Do not drink or eat the ingredients). Give the hangover cure to him, and tell him that the mourners won't listen to you. He'll then give you a warrant granting permission to enter the plague house and search for Elena. Go to that house, and try to enter again. The Mourners will try to stop you, but when given the warrant from Bravek they'll be at a loss, giving you a chance to sneak inside. Once inside, search the barrel to the west[?] of the staircase to find a small key. Elena is downstairs. Go downstairs and unlock the door with the key, talk to her to release her.

Return to Edmond's garden (where you started) by climbing down the manhole in the middle of the city, and climbing the mud pile. Talk to Edmond to finish the quest. 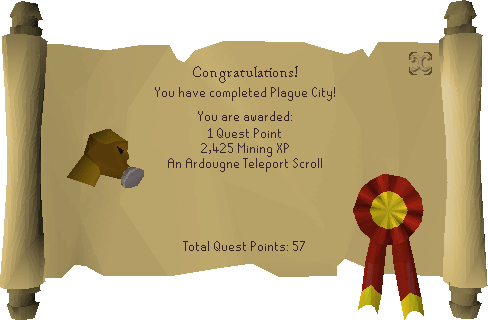 Completion of Plague City is required for the following: