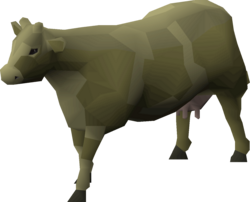 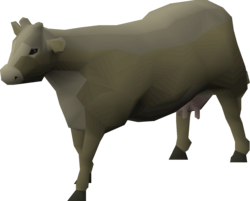 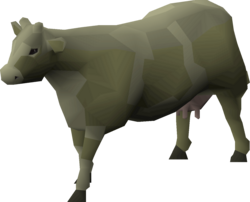 Plague cows are cows infected by a plague that recently beset the desert city of Sophanem. They are one of many plagues set upon the city by the former high priest Klenter, enraged by the actions of an adventurer stealing a canopic jar from his tomb while hypnotized by the Menaphite goddess Amascut.

Klenter set a number of plagues on Sophanem, including swarms of locust and a disease that causes the victim to develop spots on their face. The cows too have become diseased, although with a different illness. The infected cows have taken on a sickly green colour, and their milk and beef can no longer be safely consumed. As a result, players do not have the ability to milk or kill them, but can still pet them for some dialogue, which will cause the cow to make a pathetic attempt to "moo".

Attempting to pet them will result in one of the following messages:

"Awww, look at the poor sick cow. We'd never make a burger out of you."

"Don't worry cow, I'm sure somebody will find a cure for this plague soon."