Player Moderators (colloquially PMods or just mods) are Old School RuneScape players chosen specifically by Jagex staff due to their commitment to the in-game community. They are ambassadors of the game and help to maintain an enjoyable in-game environment. They were introduced to the original game on 14 June 2004[1][2], and since then the team has grown to 2,364 player moderators as of 30 December 2019.[3]

Player Moderators can be recognised by the silver crown -

- visible next to their name when they speak in-game[4] (but not in their username when right clicking), or when they are sending messages. This image cannot be disabled or hidden. On the RuneScape forums, however, there is no visible differentiation between Player Moderators and regular players. Anyone who claims to be a Player Moderator without a crown can be reported (for staff impersonation) using the report abuse menu. While acknowledged as not actually being hired members of the Jagex Staff (only regular players with extra entrusted tools), the rule is still applicable to impersonation of them. 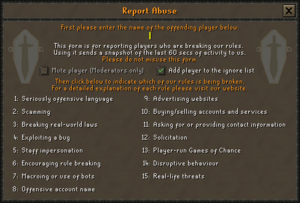 Player Moderators can tick the "Mute player (Moderators only)" option.

A Player Moderator has a direct approaches to rulebreakers. To safeguard other members of the community from disruptive or offensive players they have the ability to issue a priority abuse report which will with an immediate effect temporary mute the reported player to give Jagex staff members some time to review the incident.[5]

However, new Player Moderators are given a "Suggest a mute" instead of a temporary mute option. This is to settle in new moderators into their role as part of a training period. Once Jagex has assessed the judgement of the moderator, the in-game behaviour as well as social and forum posts, and the reports marked for muting would have been applied correctly, then the moderator would be given the full responsibility with the normal mute option.[6][7]

Occasionally when a player is being particularly defiant towards the rules, a mute is required so that other players can no longer see their text. A Player Moderator's mute is a safety precaution to help prevent the player in question from causing any more harm to themselves or others, as it will effectively stop any attempts to talk freely.[5] Jagex provides Player Moderators with muting guidelines[8], and mutes are, according to Jagex, checked to ensure that they are correct. Any incorrect mutes may be lifted, and if a Player Moderator regularly mutes without proper reason, their moderator status may be removed. As soon as a Jagex Moderator checks the report, the mute is lifted and a subsequent punishment is then applied if it is needed.

Private messages sent by a Player Moderator will remain visible when private chat is filtered to friends, or turned off, by the recipient player. Player Moderators cannot send messages, or view the online status of, players who do not have them added to their friends list and have their private status set to 'friends'. If the other player has their status set as 'offline', Player Moderators cannot see their online status, or send messages to the player, even if they are mutually added.

If a player adds a Player Moderator to their Ignore List, they will not see any additional messages from that player.

How Player Moderators are chosen 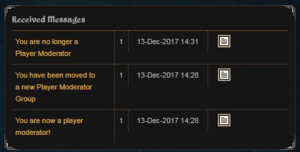 A player becomes a player moderator and has it removed afterwards.[10]

Player Moderators are chosen specifically by Jagex staff based on their truthfulness, maturity, involvement[11] in the Old School RuneScape in-game and forum communities, and by the accuracy of abuse reports (therefore, not reporting someone for extremely minor reasons, or just because you can). They must also have a secure account[12] .

Mod SteveW explained the process of the player moderator selection on the /r/2007scape subreddit as followed:

Players with old, expired offences may still become Player Moderators if Jagex feels that they have learned their lesson.[14] Though you do not have to play a certain amount of time, most moderators have played 1 year or more before being asked to join the team. It is mentioned that being on the forums helps being noticed.

Jagex will only contact the player via the Message Centre system to inform them that they have been selected to become a Player Moderator. The player is then able to accept or decline the position. Jagex will never private message you in-game and tell you to go to an external website and enter your username and password.[15] People messaging that are phishers who steal account logins, and they can be reported for staff impersonation.

Any player asking in-game for your login details should be reported immediately so Jagex can punish them accordingly. Also, if you are asked by a player in in-game chat to log out into the lobby as you have been chosen to become a moderator, report them promptly, as this is a phishing attempt as well.

Player Moderators are split into two "teams": community-oriented and moderation-oriented. Each of these teams have their own dedicated Jagex Moderator to refer to.[16]