A player-owned house (often shortened to POH) is the focus of the Construction skill. It can be bought from a Real Estate Agent for 1,000. Players' houses are located in Rimmington by default, but can be moved to one of 8 different cities for a fee. Players can enter the house through POH portals, labelled on the world map as

. For a list of pros and cons on different locations consult the POH portal page.

Estate agents can also redecorate the outside of a player's house for a fee. Along with a total redecoration of a house, each house style comes with a unique tune that plays upon entering the house.

These House Styles are irrespective of the location your house is in. For example you could have a whitewashed stone house style while your POH is situated in Yanille.

For more information on the house styles available, please refer to the Estate agent. 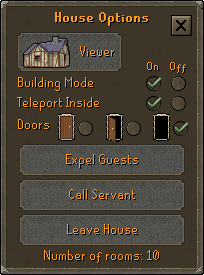 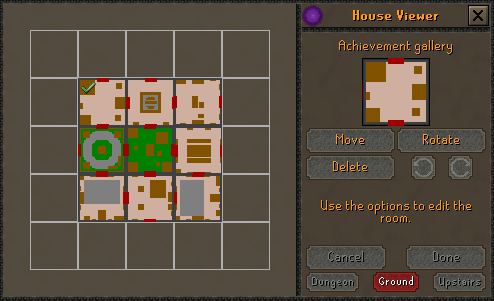 The most important point to consider when designing the layout is what rooms are placed next to the garden portal. For beginning players, the Workshop or Kitchen can be the best rooms next to the portal because they offer fast training methods such as building flatpacks or larders. Portal Chambers are very useful to place directly adjacent to the portal, since this allows quick and easy access to teleports for when players wish to use their house as a teleport hub. Another room that is often put near the portal is a Chapel, which will allow players to train and recharge prayer more quickly.

Another important point to consider when building a house is which direction that rooms face. While this is not a huge concern for most rooms, some orientations can make moving through the house much faster. For example, normal staircases can be annoying if built facing the wrong direction unlike Spiral staircases, which can be accessed from any side. When a staircase is added to a Skill Hall, it will connect to the room above or below by default if and only if the room is facing the proper direction. This restriction is in effect for both normal staircases and, even though they do not have a "direction", spiral staircases. Another good example is the orientation of the exit portal.

In the official "House Party" World 330, many players, who don't own a fully fledged house, enter publicly hosted houses for their most useful features:

Players can view whose house is available by viewing the house advertisement board next to each POH portal. This will list the above information in a menu that the player can select from to pick a house to go to.

Players typically teleport to outside of the house with Teleport to house tabs and set Teleport Inside turned off in the House Options, as seen in the image below.