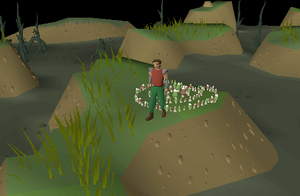 The Poison Waste is a large, mostly inaccessible, marshy area of Tirannwn, south of Isafdar. It is located on the western coast of Gielinor, and also has a southern coast. Needless to say, the name adequately describes the deadly, toxic nature of the sludge permeating this area.

To the southwest of the Poison Waste is a small village named Zul-Andra, where the villagers sacrifice themselves to their serpentine god, Zulrah. Players can visit this area after completing Regicide up to the point where they access Port Tyras.

Players can visit the Poison Waste by using a fairy ring (code DLR), which will teleport players to a small island in the swamp (indicated by the travel icon on the map). Players can unlock Exposed, the piece of in-game music unlocked by players who have travelled to the Poison Waste. This small island contains badgers and Broken Handz, an NPC who will allow you to use his telescope for spectating other players fighting Zulrah.

Players can collect sulphur on its mucky shores, the location where coal-tar can be collected from the sludge itself. The sulphur is used during the Regicide quest, and the coal-tar is used in both Regicide and Mourning's End Part I.

The Poison Waste was home to a Dragonkin during the God Wars, who created serpents in the waste, but abandoned them as failures. One of these serpents drastically grew in size and intelligence, eventually becoming Zulrah.