A graph displaying the voter participation in each poll.

Polls are in-game votes in which players are asked to express their preferences for certain changes within Old School RuneScape. Only members with a total level of 300 or above and with a minimum total play-time of 25 hours can participate.

When a poll is live, players who log in and have not cast their votes will receive a message in the chatbox stating There's a poll running - head to the community section of the account management menu to cast your vote!. Poll booths will also have a small raised flag to indicate that the player has not yet voted, and the Account Management Community tab will indicate that a poll is active, letting players vote from the tab.

Polls on game updates use a plurality voting system to determine their outcome. Any question containing a Yes option requires a supermajority of 75% of the total votes to pass. This is not counting Skip question votes, an option introduced following the results of the Quality of Life - Top 10 Skilling Suggestions poll. 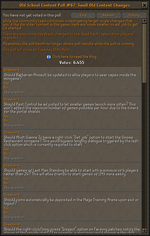 Example of a running poll in a poll booth. 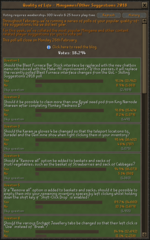 Placed votes cannot be changed, and every question must be answered to vote. A running tally could previously be found during polls at poll booths or on the official website. These and other aspects related to polling itself have also been subject of polls, but have historically failed to pass. Beginning 12 April 2019, all poll results are now hidden before the poll ends as part of a game integrity update.