Porazdir is a Tsutsaroth demon[1] who was once one of Zamorak's most trusted generals during the God Wars. Said to kill any in his path without mercy, even if they are demons, Porazdir is described as "completely mad", and regularly clashes with Justiciar Zachariah.[2]

When fighting Porazdir, it can use a special attack that will fire a ball of energy at the player that can hit through protection prayers for upwards of 30 damage. When it uses this attack a message in the chatbox will state Porazdir fires a ball of energy directly linked to his power! This damage cannot be negated, but if players are very far from him (12 tiles) when the ball hits them, no damage will be taken. 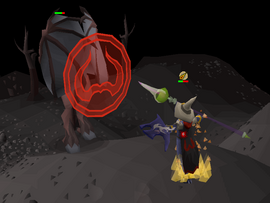 Porazdir can only be harmed by the Flames of Zamorak spell. As such, a Zamorak staff, staff of the dead or its toxic counterpart is required to defeat it. Porazdir is considered a black demon for the purpose of a Slayer assignment.