From Old School RuneScape Wiki
Jump to navigation Jump to search
The RuneScape Wiki also has an article on: rsw:Port Phasmatys
"Ghost Town" redirects here. For the historical use of ghost town, see Edgeville.

The town is populated by ghosts, and a ghostspeak amulet or Morytania legs 2 is needed to talk to the majority of the inhabitants. The town features heavily in the Ghosts Ahoy quest, and you need to at least start this quest in order to gain access to the town. Entry to the town requires two ecto-tokens or the completion of Ghosts Ahoy for free passage.

The town is especially notable for the Ectofuntus directly north of its gates, and its furnace, which is among the closest to a bank. It is possible to travel to Mos Le'Harmless and Dragontooth Island from the docks, as well as accessing the charter ships.

Port Phasmatys dates back to the Fourth Age and was founded by human settlers, who had travelled to Morytania, which at that time was not considered more dangerous than other places around Gielinor. Lord Lowerniel Drakan, the ruler of Morytania, took notice of the humans settling in his kingdom and demanded that they paid blood tithes to the vampyres. When the people of Port Phasmatys refused, Lord Drakan began to plot an invasion. Knowing that they had no chances against an army of vampyres the people of Port Phasmatys turned to Necrovarus, a powerful mage from the Eastern Lands. Necrovarus constructed the Ectofuntus and used it to erect a magical barrier around the town. The plan was successful and the vampyres were unable to invade and retreated. The people of the town continued aiding Necrovarus in maintaining the Ectofuntus, but soon consequences began to emerge. When a citizen died they were unable to move on to the afterlife, and their ghosts remained stuck in Port Phasmatys. This was Necrovarus' intention and eventually there were no living inhabitants left, only ghosts and the town fell into disrepair. Lord Drakan gave up trying to take over Port Phasmatys as there was no longer any blood to harvest and as such the town was of no use to the vampyric society. Although Port Phasmatys was mostly abandoned, sailors, traders and pirates still ocassionally visits the town. Any visitors to the town are demanded to pay a tribute to the Ectofuntus. 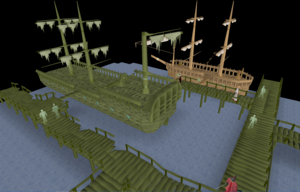 The ghostly docks of Phasmatys. 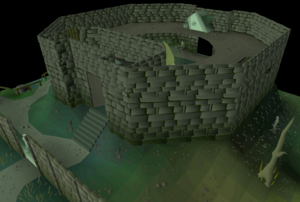 The temple for the Ectofuntus.

After starting the Ghosts Ahoy quest, you can worship the Ectofuntus to receive 4 times Prayer experience for every bone. It's a bit of effort, walking up and down with buckets and pots, but well worth it for this skill as it is very hard to train. This is even more worthwhile when using expensive dragon bones, famed for giving high amounts of Prayer experience, or better. Completing the quest will help immensely as you can use the Ectophial to teleport back and forth, and bank at the town if needed. Players who have completed various levels of the Morytania Diary will be able to claim slime and bonemeal daily from Robin Hood in exchange for bones, as well as being able to teleport to the slime pit several times a day.

Buckets of slime can be purchased from the traders located on various docks around Runescape.
Many players use amulets of glory or rings of dueling to teleport to a bank as it is faster than running to the bank in Port Phasmatys. A ghostspeak amulet will still be needed to talk to the disciples.

Many of the ghosts require payment in ecto-tokens, which is the currency of the town, though the shop still uses coins. See the Ectofuntus guide above or the Ghosts Ahoy quest for a guide to obtaining ecto-tokens. Players will also need 20 ecto-tokens during Animal Magnetism.

Phasmatys is the sixth closest furnace to a bank in the game, making it extremely popular for players training Smithing.

There is a brewery in the basement of the inn in Port Phasmatys that is used in the Cooking, and is one of two breweries in the game, the other being in Keldagrim. You may buy ale yeast from the brewer there using ecto-tokens.

There is a general store in Port Phasmatys, notable because it stocks far more buckets and pots than any other shop. This is especially useful to players that need to buy the supplies necessary for Ectofuntus.

Ak-Haranu, a merchant from the Eastern Lands, runs Ak-Haranu's Exotic Shop. and can sell players bolt racks to be used as ammunition for Karil's crossbow.

There is a range for Cooking, but it is very under-used, because it is a reasonable distance from the bank, and there are far better places to cook.

There is an allotment, flower and herb patch used in the Farming skill just to the west of the town. Lyra can look after your crops for you here. There is also a farming shop where you can buy the usual items for use in farming. 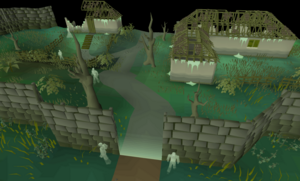 The southern entrance into Port Phasmatys.

The charter ships also have a dock in the harbour in Port Phasmatys. It provides rides to several other locations. After completing Cabin Fever, the charter ship fare is reduced by 50%. Wearing the ring of charos(a) also reduces the fare by 50%. These two bonuses can be stacked to reduce the cost to 25%.