From Old School RuneScape Wiki
Jump to navigation Jump to search
Not to be confused with Piscatoris Fishing Colony.
"Piscarilius" redirects here. For other uses, see Piscarilius (disambiguation). 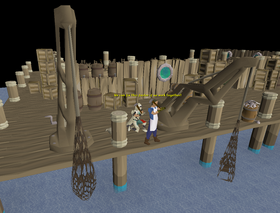 If keeping to the two cranes at the general stores, noted planks can be sold to the general store for 0 coins and bought back for 1 coin, saving bank trips. Keep the majority in your inventory as small amounts disappear from the store or can be bought by other players. This does not work for ironmen due to the store becoming overstocked. Alternatively, a Plank sack can be used, allowing players to carry an additional 28 planks.

The Queen of Thieves[edit | edit source]

This is the fastest method of gaining favour; After players reach 30% favour, players with level 15 in Hunter can hunt for sandworms (10 Hunter experience per find) in the area north of Tynan's Fishing Supplies. Doing so requires a spade and at least five buckets. Each bucket of sandworms delivered to Tynan rewards around 0.36% favour. The shop also has a large stock of buckets. It is recommended to bring coins, as Tynan takes the entire bucket instead of emptying them. A bank is also nearby to the west.

The chance of obtaining sandworms is between 65% and 75% depending on the player's Hunter level.[1]

Once players reach 75% favour, players with level 49 in Thieving can talk to Captain Khaled in the foodhall south-east of the bank to get an assignment. Players will need a lockpick to pick the lock on the drawers, and they will have to avoid being caught by the patrolmen. A successful heist awards a few hundred coins, and 2% Piscarilius favour. In addition you earn 750 Thieving experience for successfully picking the lock and retrieving the artefact and additional Thieving experience equal to 40 times your thieving level for safely delivering the artefact to Captain Khaled. Note, if you logout or teleport after acquiring the artefact but before you safely deliver it you will report to Khaled that you lost the item and will have to get another task.