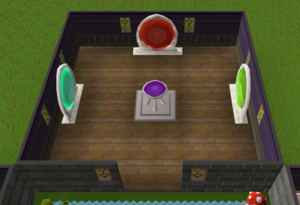 A Portal chamber is a room that can be built in a player-owned house. It requires level 50 Construction and costs 100,000. Within a Portal Chamber, players can use their Magic skill to build portals that they and their guests can use to teleport to various locations around Gielinor.

There are 2 hotspots available:

A focal centrepiece is required for the house owner to direct the portals. The higher level greater teleport focus and scrying pool are mostly for cosmetic purpose only, meaning just a teleport focus will suffice for creating and using all portals. It can be removed after directing portals, to avoid having to walk around it on the way to the portals. The scrying pool can give players a preview of the teleport destination, which may be useful for Deadman mode or teleporting to the wilderness.

The house owner can use the centrepiece to direct portals to a specific teleport destination. The table below shows the possible locations and their costs.

A player directing a portal to a specific location.