The Possessed Priest is a sub-boss featured in the quest Icthlarin's Little Helper, being possessed by Amascut during a ceremony intended to put the Spirit of Klenter to rest, he will try to kill the player and the other members of the clergy.

The priest attacks using magic. When fighting him, it is beneficial to have armour that gives good magic protection such as snakeskin, dragonhide or mage robes; alternatively, the Protect from Magic prayer will prevent him from harming the player. Because of his low attack range (5 tiles), he can be safespotted on the east or west side of the table, with the player on the opposite side of the room. 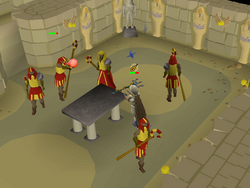 As a mage, he has substantial magic resistance, along with high defence bonuses against stab and crush attacks; low-level players are advised to kill him with either slash or ranged attacks.

Note: If you take too long to defeat him, the message "The priest seems to have recovered from the Devourer's spell" will appear, and you will have to exit the door and re-enter to face him again with full Hitpoints. (Beware—do not exit the door, or you'll have to start the whole process over again).

The player will receive one of the potions below at random.