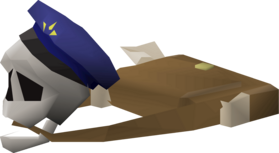 Postie Pete is a skull, and RuneScape's only known postman. He delivers all of the 'Postbag from the Hedge' letters to their destinations and ventures into whatever dangerous places he must to get there - although he can never be seen to do this in-game, preferring instead to pop up around Castle Wars, the Falador Party Room, Varrock Palace library, Ice Mountain, The Bandit Camp general store in the Wilderness, and the Ardougne Zoo.

He can speak over 1,000 languages, including wyvern, and when you encounter him he usually tells a rather weak joke. Before leaving the place he has spawned, he usually says 'Well, I should be heading off', a pun on his lacking of a torso.

He also appears to take the player to the evil twin random event.

Postie Pete can appear at the following locations, excluding appearances of the random event:

Postie Pete as he appears on the Postbag from the Hedge stamp.
Retrieved from ‘https://oldschool.runescape.wiki/w/Postie_Pete?oldid=14330060’
Categories:
Hidden category: