From Old School RuneScape Wiki
Jump to navigation Jump to search
The RuneScape Wiki also has an article on: rsw:Priest in Peril
The wiki defaults to the British convention for floor numbering: Ground floor, first floor, etc. This may be changed by clicking the moon icon at the top right of the site.

Priest in Peril is the first quest to take place in Morytania, and is required to enter the region. At the command of King Roald, you must head to the temple of Paterdomus to aid the monk Drezel with recovering the temple.

{"requirements":"None","desc":"Recently contact has been lost with the temple to Saradomin on Misthalins' Eastern border. [[King Roald]] would be very interested to know what has caused this lack of communication, and seeks an adventurer willing to report back to him on the situation.","difficulty":"Novice","kills":"* [[Temple guardian]] dog ''(level 30) You cannot use [[Magic]].'' A [[Ring of recoil]] will not register that you killed the [[Temple guardian]].\n* [[Monk of Zamorak]] ''(level 30)''","name":"Priest in Peril","start":"Speak to [[King Roald]] in the [[Varrock Palace]].","length":"Short","items":"* 50 unnoted [[rune essence]] or [[pure essence]] (can be mined during quest, after completing [[Rune Mysteries]]. All 50 essence does not have to be of the same type.)\n* [[Bucket]] (spawns above the castle's kitchen in the north-easternmost room (go to the kitchen, and climb up the stairs))"} 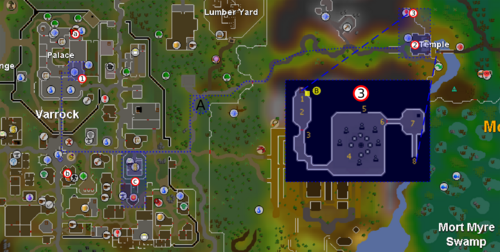 Map Showing the Priest in Peril Quest Legend:
1: King Roald, 2: The temple (with Monk of Zamorak (level 30) and Drezel), 3: Dungeon (with Temple guardian (level 30) and Drezel at the end of quest), a: Bucket (upstairs), b: Bucket in general store (2 coins), c: Bank or Rune essence mine (Requires Rune Mysteries), A: Quest Area (Area to travel, from begin to end, all items can be found in or along path), B: Safespot for Temple guardian

Start this quest at Varrock Palace by talking to King Roald. He tells you that contact has been lost with the temple and wants you to go and check it out for him.

The entrance to the temple.

The temple is located east of Varrock. Go through the wooden gate north-east of the east exit by the Earth Altar. Then, follow the path to the temple. Click on the temple doors and someone will ask what you want and who you are. Tell them you are sent by King Roald. After some whispering they will ask you to kill a dog. Agree to it.

Climb down the dungeon entrance north of the temple, then kill the level 30 temple guardian. You cannot use Magic. The temple guardian can be safespotted using an inside corner of the room by moving one square east after attacking the dog with ranged after coming down the ladder. After killing the dog go back up the ladder.

Head back to Varrock Palace, using a Varrock teleport (optional) and talk to King Roald again. King Roald becomes enraged, and explains that the dog was guarding the palace from attack. He instructs you to go back and fix it right away. If you don't have one, grab the bucket from above the kitchen, or buy one from the general store.

Back to the temple[edit | edit source]

Travel east, and knock on the temple door again. This time, the door swings open. Kill one of the level 30 Monks of Zamorak to get a golden key.

Note: these monks can hit hard with their Magic (though they can be safespotted using the church pews). It may be wise to use prayers to assist your fight, as there is an altar in the room you can recharge with.

After receiving the key, go to the top floor using the flight of stairs, then climbing the ladder in the south-west corner, and use the talk-through option found on the cell door to talk to Drezel. Ask him to tell you about the holy river. Next, go back down the trap door into the dungeon. With the golden key in your inventory, you can pass through the gate in the Paterdomus dungeon where the guardian was located earlier. After traversing the path, you will see some monuments. Study them; you will notice one of them has an iron key in it. Use the golden key on it to swap keys. After obtaining the iron key, use your bucket on the well to fill it with murky water. 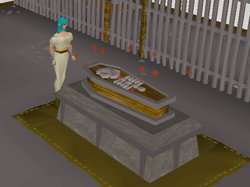 The player pours the bucket of blessed water on the coffin, trapping the vampyre within.

Go back to the top floor of the temple, and use the iron key on the cell door. Then, go inside, and talk to Drezel. You will find out that the water is not blessed. He will then bless the bucket of water that you filled earlier and give it back to you. Use it on the coffin to seal the vampyre. Talk to Drezel again and he will tell you to meet him in the dungeon. Go meet Drezel in the dungeon and hand over all of the essence you brought with you before returning to the bank to get the rest.

Now, return to the bank and get a full inventory of rune essence or pure essence. Note that it needs to be unnoted essence! Return to the dungeon's monument room, and then go through the gate past it. You will find Drezel there. Talk to him, he will tell you he needs 50 rune essence or pure essence. Give him your inventory of essence. You can use more than one trip to bring Drezel the full 50 essence.

Note: due to your inventory only having a capacity of 28 spaces, you will most likely have to do this part in 2 trips, unless you have Runecrafting pouches. It is suggested to bring 24 essence the first trip along with the other necessary items, then banking and returning with 26 essence and enough space for runes to teleport.

Note: You need to talk to Drezel one more time to be able to pass the barrier to Morytania. 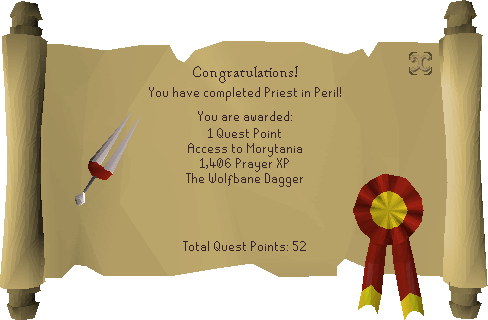 Completion of Priest in Peril is required for the following: