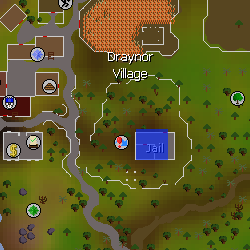 Prince Ali of Al Kharid is the son of the town's Emir and an important political character. The prince was kidnapped by Lady Keli and the player must help rescue him from the Draynor Village jail during the Prince Ali Rescue quest. Lady Keli's plan is to hold him for ransom, but this is to be foiled by the player.

Prince Ali has a dark skin tone and wears a top similar to Lady Keli when captive in the jail area. During the escape, he disguises himself by dying his skin lighter, and donning a fair wig and a pink skirt to make himself resemble Lady Keli. He then returns to Al Kharid Palace with Leela, the daughter of spymaster Osman sent to free him.

However, after the quest, players can still find him in Lady Keli's jail. If the player hasn't left the jail when he respawns, they may talk to him. He says "I owe my life to you for that escape. You cannot help me this time, they know who you are.", meaning he has somehow been recaptured, although other people seem unaware of it.