Prince Ali Rescue is a free-to-play quest, and one of the first released. It's notable for allowing entry through the Al-Kharid/Lumbridge gate without the 10gp fee.

Skip this part if you have all the required items.

You would ideally start in Varrock, where you would buy or withdraw from your bank the minor related items required. You also need a pickaxe to mine with, an axe for Woodcutting, and a tinderbox though you may find ashes from someone else's fire. If you can't find ashes already, cut a tree, light the logs, and then wait for it to burn out while banking the axe and tinderbox you no longer need. Alternatively, you can kill an elemental wizard. Bring your shears if you already have them to save time, otherwise get them from Fred the farmer's house later on. You should also withdraw some cash to pay for the required items and toll gate crossings.

Buy the pink skirt at the clothes shop, then leave by the south city exit. Buy the 3 (or 4) beers at the Blue Moon Inn on the way out, or take some from the longhall in the Barbarian Village for free.

If you have not already started the quest, then go south into the Al Kharid desert area, passing the Al Kharid mine, down to the palace and begin the quest; then, talk to Hassan and then Osman. If you did not bring a bucket or jug of water you can grab the jug of water off of the table in the east room of the palace. Otherwise, take the road south towards Lumbridge. Cross the north bridge to the forge, and smith a bronze bar there, or use the Al Kharid forge if you are there.

Go to Lumbridge Castle and spin all the wool. Take the jug from the kitchen and fill it with water if you didn't get the jug of water from the palace, then take a pot from the kitchen, and a bucket from the basement if you need them. Fill the bucket with water, wet the clay with it, then fill it again.

Follow the road north out of Lumbridge, then go to the Fred the Farmer's house. Behind his house there is a garden with 12 onions. Pick two onions, then back to the road for the grain field and mill to make the pot of flour. If you didn't have shears earlier, get them from his house, shear 3 sheep and go back to Lumbridge Castle to spin the wool.

At this point, you should now be carrying:

Items required: 3 balls of wool, rope (unless buying from Ned), 2 onions or yellow dye, 1 redberries, pot of flour, ashes, a bucket of water, soft clay, a bronze bar, and 50 coins (unless teleporting).

You begin your quest in the palace of Al Kharid by talking to Hassan. He will direct you to a shifty looking fellow outside the northern perimeter of the palace, who goes by the name of Osman. Osman will tell you to find and speak to his daughter Leela, who can be found strolling east of Draynor Village just south of the wheat field. Talk to Leela and she will tell you what you need.

If you look west from where you are standing, you should see the door to Ned's house. Ask Ned to make you a wig - get the wig made from the balls of wool. If you do not already have the rope at this point, you can have Ned make you one for three balls of wool (or you can buy one from him with coins). Once you have the rope and wig, go into the house just west of Ned's, and ask Aggie (the witch) to make you skin paste. If you do not already have the dye, you can ask her to make it for you, requiring two onions and five coins. Dye the wig yellow.

Go in to the jail directly east of Draynor as quickly as possible, or attack the aggressive level 26 jail guards. This is a multicombat area, however, so unless you have a similar or higher combat level and at least mithril equipment, you should try to avoid attacking them. Their max hit is a mere 3 damage, and they can be dispatched fairly easily with mithril or adamant equipment, but they have decent accuracy even against armour, so food is essential if you plan on killing them, especially if more than one attacks. Another alternative is to have a friend accompany you and have them either attack the jail guards to distract them, or aid you in killing them. They will ignore you if your combat level is 53 or higher.

Once inside the jail building, if you do not see Lady Keli in or around it, wait a little - she will eventually respawn. Then, tell her she's famous all over Gielinor, then ask her about her latest plan, and that she must have been very skillful. Ask her then if she's sure his people won't try and rescue him. Ask her if you can see the key and then if you can touch the key for a short amount of time. If you've gotten the soft clay with you, you shall make an imprint in the clay.

Go to the bank and get the bronze bar and 20 coins and return to Osman so he can make the bronze key.

Talk to Leela, she will be happy about the plan and hand you the bronze key. She will then recommend that you talk to the witch for the paste, if you have all the ingredients talk to Leela once again and then head for the jail. Talk to Joe and offer him a drink, (be aware that only normal beer will work) and another, and another. Use the rope on Lady Keli, the key on the cell door, then talk to Prince Ali and he will use the disguise and escape.

Note: If you take too long to enter the cell, or if you leave it before freeing Prince Ali, you will have to obtain another rope and tie up Lady Keli again.

After freeing the Prince, return to Lumbridge, and pass through the gate that connects Lumbridge and Al Kharid. You can pass through this gate free of charge from now on. Go and talk to Hassan in the Al Kharid palace to claim your reward.

Note: From now on, should you attempt to talk to Lady Keli, a message appears over her head that says: You tricked me, and tied me up, Guards kill this stranger!! She will tell the guards to get you, after which one of the guards will say, Yes M'lady and attack you; however, you can escape by running out of the jail grounds. 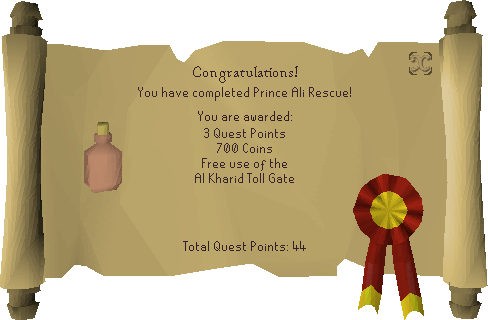 Completion of Prince Ali Rescue is required for the following: