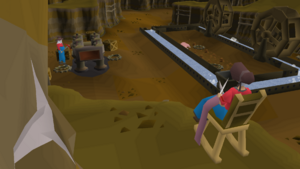 Prospector Percy's Nugget Shop is a clothing store in the Motherlode Mine, owned by Prospector Percy. It only accepts golden nuggets obtained from washing pay-dirt as currency (nuggets found in the digsite are not accepted). It is the only shop that sells the prospector kit.

380 nuggets are required to purchase all of the non-consumable items from the shop (180 for the prospector kit, 100 each for the coal bag and gem bag). Obtaining this many nuggets would require mining 13,870 Pay-dirt on average.

At current prices, each gold nugget is worth the equivalent of 1,300 when purchasing soft clay packs and selling the contents on the grand exchange. Alternatively, if a player buys bags full of gems, they can expect an average of 740.48 per nugget.

Players can talk to Prospector Percy and ask him if there are any other things they can unlock, and he will list the following options available as one-time purchases: