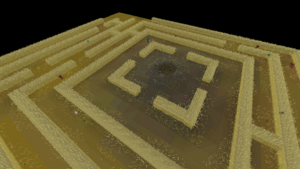 Puro-Puro is the magical homeworld for imp-like creatures, like implings who are infamous for stealing various items from the citizens of Gielinor before fleeing to Puro-Puro; however, not all implings manage to find their way back and may remain trapped on Gielinor. In recent times, the portals have remained open for long enough to allow adventurers to find their way to Puro-Puro.

Puro-Puro contains 11 of the 12 types of implings that can be caught by players using the Hunter skill, as crystal implings may only be caught within the walls of Prifddinas.

Completion of the Lost City quest is not required to gain entry if a player uses one of the temporary portals located around the world.

When an imp appears in various wheat fields around Gielinor and begins walking in circles, a temporary crop circle will form which will allow players to teleport to Puro-Puro. Players must have at least level 17 Hunter in order to step through these crop circles. For those who have completed the Lost City quest to have gained access to Zanaris, a permanent crop circle can be found in the wheat field east of the fairy ring. All other crop circles, which are temporary and can last around 30 minutes, have a chance to spawn in any of the following locations:

Currently, the Maze is the only accessible feature of Puro-Puro, and contains a number of implings of varying types. As mentioned above, all the player needs to do is enter a portal, and they will find themselves just outside the Maze. Elnock Inquisitor is also located outside the Maze, and will give the player advice and instructions for the Impetuous Impulses minigame. Due to the magical nature of Puro-Puro, the maze is constantly changing, with new walls and passages appearing every few minutes, and the player's mini-map will also malfunction when on this world.