Pyramid Plunder is a Thieving minigame set in the Jalsavrah pyramid in Sophanem, far in the southern Kharidian Desert. Inside Sophanem, the Jalsavrah Pyramid can be found with four anonymous looking doors. Access to the minigame can be found behind one of the doors, guarded by the Guardian mummy.

During the minigame, the player has five minutes to plunder the contents of Jalsavrah. The pyramid consists of eight rooms, each requiring progressively higher Thieving levels to enter and loot. Artefacts pillaged from the rooms range from ivory combs to golden statuettes, with the most valuable artefacts found deepest in the pyramid.

This minigame is the only place where players can obtain the Pharaoh's sceptre, which is a useful item due to its unique teleports, as well as its uses in Construction and Treasure Trails. 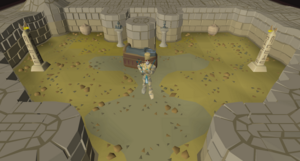 Travel to Sophanem, via magic carpet or Pharaoh's sceptre (Jalsavrah), and enter the city. Talk to Tarik outside the pyramid, and then, attempt to enter the pyramid on one of its four sides. You may enter a "dud" room; if this happens, simply leave the pyramid. You will then be placed at the northern entrance; check any leftover sides. For subsequent entries, the mummy's last known location can be used, however it will change after ~25 minutes.

You will know when you have reached the right room when you investigate a side and get 20 Thieving experience. Occasionally, the Guardian mummy inside will shove the player out, dealing 3 damage to you. If this happens, simply keep investigating that side until you get in.

To start the game, you will need to speak with the Guardian mummy to learn about the rules. Once you are ready, he will take you to the first room.

When the mini-game begins, a timer will show on the right hand side of your screen. You have five minutes to loot as much treasure from the pyramid as you can. If you get a Pharaoh's sceptre during your looting trip, the Guardian mummy will instantly end your attempt and make you leave the pyramid.

Inside the rooms[edit | edit source]

Inside, you will find a room that contains a spear trap, urns, a golden chest, a sarcophagus, and doors out and to the next level. There are eight rooms in total. The first room requires 21+ Thieving—the requirement increasing 10 levels per room. The last room has a 91+ Thieving level requirement.

I want my mummy!

Players should try and pass through all the doors to make it to the highest room they can use and then thieve everything in that room, for better rewards and experience. Experience increases from each thievable object further into the pyramid.

This mini-game provides the fastest Thieving experience rates in RuneScape at level 91 and prior to this level only beaten by knocking out and pickpocketing Menaphite Thugs (blackjacking). 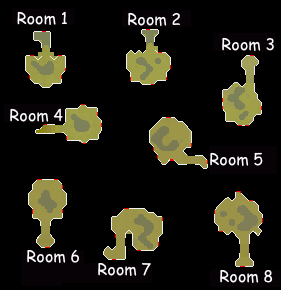 A map of the pyramid chambers.

The general strategy for the game is to loot as many chests and urns as possible (sarcophagi do not give Thieving experience but give Strength experience instead). Ideally, you want to fully loot the highest level room available to your level, and if your level is 61 or higher, loot as many urns in the previous room as far as time allows.

It is important to note that each room gives roughly 50% more experience for every action than the previous one (with the exception of Room 8), so before level 61, you just rush to your highest available room and loot everything in there and leave the game, since the amount of time to reach the low level rooms is a lot shorter than for the higher level rooms.

From level 61 onwards, you will roughly spend 45 to 90 seconds to get to your second highest available room, and use the rest of the time remaining to loot as much in your two highest accessible rooms as possible. It is advised to watch your time and move to the last room when you feel like you might not have enough time to fully loot the last room. Since looting in a higher level room gives more experience, you always want to get everything there.

You may want to choose to loot the chest in every room to increase the chance of receiving a Pharaoh's sceptre. For higher experience per hour, the earliest chest to loot is in the third last room available to your level; while they give a lot less experience than urns, they are looted a lot quicker.

Also, you will want to loot the chest at the end of looting a room before leaving to the next one so you do not get interrupted by or waste time killing the Scarab swarm.

This example expects proper but not perfect attention from the player, so your results may vary.

At 71-80 Thieving, you can get up to Room 6 in the pyramid. Therefore, you will run straight to Room 5, only looting the chest in Room 4, then loot as many urns and the chest in Room 5 before you deem it necessary to leave to Room 6 to loot everything in time. On average, a player should be able to loot nine urns in Room 5 (~7 at level 71 and ~11 at level 80). A player at level 71-80 will thus gain the following experience in a five minutes game on an average:

You will want to bring high level food (monkfish or above) and lightweight equipment. Helpful but not absolutely necessary may be some sort of poison immunity and a lockpick to open the doors, as well as a weapon or prayer potion to help in blocking any scarab swarms or mummies that appear when you open up the golden chest and/or sarcophagus in the rooms.

With a Pharaoh's sceptre, fast bank trips are possible if a player combines a bank teleport with the sceptre teleport to the pyramid. This gives the option of using lower-grade food as the bank round trip can be very fast. Alternatively, completing the Contact! quest will provide a bank in Sophanem itself.

The table below lists the various thieving options and the reward associated with it. Note that the experience from checking and searching adds up when both steps are performed. When the check step is ignored, players are more likely to take damage, but can use the check and charm time to search more urns yielding more overall Thieving experience.

A relatively simple strategy to follow is rushing to the penultimate room and looting each chest along the way. Try to loot a few urns prior to looting the chest in the second-to-last room (4-6 depending on time remaining), and head to the final room and loot all the urns and the chest. If under half time remains, then it would be best to start heading to the last room.

With the aforementioned advanced setup, a round would consist of the following:

When players loot the urns, sarcophagi, and chests, they will find various trinkets that they can trade for coins with Simon Templeton at the Agility Pyramid not far from Sophanem. There is a crack in the wall behind the Sophanem bank which players can use as a shortcut to get to Simon Templeton faster. Below are the amounts Simon will give for Pyramid Plunder artefacts:

Players may also find a Pharaoh's sceptre within a grand gold chest or sarcophagus. If they do, they will be immediately kicked out by the guardian mummy, as he will be angry that the player has found his master's sceptre. Warning: If the player has a full inventory, the sceptre will be dropped on the ground under the player.

The drop rate of the sceptre increases with each consecutive floor, with the highest drop rate at floors 5 and above.

The sceptre can only be obtained after a successful theft (meaning no scarabs or mummies appear) of the chest or sarcophagus. The chance of an unsuccessful theft changes depending on the players Thieving level and which floor the player is on. Approximate drop rates are shown below, taking into consideration the rates at which scarabs or mummies appear.

Below gives the estimated odds of receiving a Pharaoh's Sceptre in a completion of the minigame per Thieving level. These odds are calculated with the assumption that all possible Golden Chests are looted along with the Room 4 and Room 5 Sarcophaguses. These odds take into consideration the rates at which scarabs or mummies appear.

The hourglass that used to be displayed.