Pyrefiends are Slayer monsters that require level 30 Slayer to kill. As their attacks are magic based, it is recommended to wear armour with a high magic defence bonus, such as dragonhide. Pyrefiends and Harpie bug swarms are the only monsters to drop steel boots.

While on a pyrefiend slayer task, there is a 1/200 chance that a Flaming Pyrelord will spawn after you kill a pyrefiend (if you have Bigger and Badder unlocked). 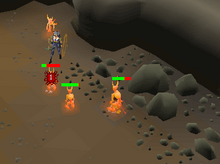 Players can safespot multiple Pyrefiends by standing in this spot in the Fremennik Slayer Dungeon.

The Pyrefiend's attack accuracy is based on the player's magic defence, so it is highly recommended that players wear dragonhides or other ranged armour to mitigate damage. Due to their low magic defence, they are highly susceptible to Magic attacks.

Players who intend to use melee and have 43 Prayer can flick the Protect from Melee prayer to avoid being damaged. An alternative method would be to use a safespot with a halberd or using Ranged attacks. Players should be aware that although their max hit is relatively low for their combat level, they can hit very consistently. Note that the Dwarf Cannon will not work in Fremennik slayer cave due to the humidity but is functional at the back of the Isle of Souls in the burnt forest area.

The average Pyrefiend kill while in the Wilderness God Wars Dungeon is worth 1,405.47.