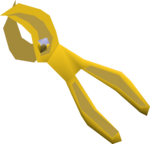 Queen's secateurs are used in A Fairy Tale Part I and A Fairy Tale Part II quests. They are first obtained as a drop from Tanglefoot. In part 2, you need to pickpocket Fairy Godfather to get them, which requires a level of 40 Thieving.

These secateurs cannot be wielded, or used as normal secateurs. For example, should you use them on trees you have planted, you will only receive the message: "Nothing interesting happens."

If the Queen's secateurs are lost before talking to the Fairy Godfather at the end of Fairytale I - Growing Pains, they can be reobtained by entering the gap in the wall next to the Cosmic Altar into the tunnels where you fought Tanglefoot. The secateurs will appear in your inventory upon squeezing through the gap.