Prayer is a non-members combat skill. Prayer is trained by burying bones, using them on an altar in a player-owned house, by using them on the altar in the Chaos Temple (hut), by praying at the Ectofuntus with bonemeal and buckets of slime, by killing reanimated monsters summoned via the Arceuus spellbook, or by scattering Demonic ashes. Different bones and different Demonic ashes give different amounts of experience. 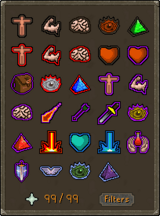 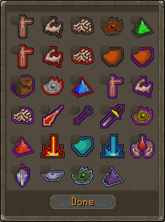 Flicking Protect from Melee and an offensive prayer when using a 4-tick weapon against a 6-tick monster.

Flicking Protect from Melee and an offensive prayer when using a 4-tick weapon against a 4-tick monster.