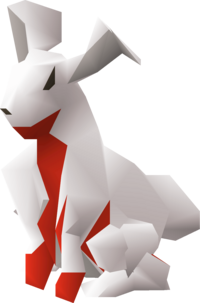 The rabbit is a monster that is found in a cave in the Gwenith Hunter area north of Prifddinas.

Despite its low combat level, it is much more dangerous than it suggests, possessing more health than the Corporeal Beast and dealing extremely high damage coupled with an attack speed on par with that of Commander Zilyana. Monster Examine cannot be cast on the Rabbit; when a player attempts this, they receive a message "You can't find out their stats."

When killed, it is guaranteed to drop a crystal grail. The rabbit also has a respawn time of 6 hours once killed. Damage dealt to the rabbit gives enhanced xp rates.

Due to its massive health pool, ruby bolts (e) and ruby dragon bolts (e) are very effective against it. A practical strategy for killing the rabbit is kiting it around the room and shooting it while avoiding being in its melee range, similar to how Commander Zilyana is often killed. An alternative but easier method of slaying the rabbit is by entering its lair, shooting it once and leaving the lair again, repeating this until it is dead. However, this takes much longer.

If the rabbit is frozen with a spell such as Ice Barrage, it will only stay frozen for a few seconds as opposed to the regular 20 seconds.