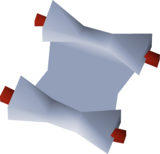 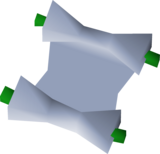 Radimus notes is a quest item given to the player by Radimus Erkle during the Legends' Quest and is needed to enter the Kharazi Jungle. The notes consist of an incomplete map of the Kharazi Jungle, which Radimus wants to have fully charted. The player must take the notes to the western, central and eastern parts of the jungle, and use the notes at each location with 3 papyrus and a piece of charcoal in their inventory. If you lose the notes at any time during the quest then you can talk to Radimus Erkle and pay 30 coins to get them back.

Once the map is completed, the player should give the notes to a Jungle Forester in exchange for a bull roarer. The Jungle Forester will copy them and return them so you can turn them in to Radimus at the end of the quest.

It is also used in the Freeing Sir Amik Varze section of Recipe for Disaster, if the player has not completed the Legends' Quest yet.