From Old School RuneScape Wiki
Jump to: navigation, search
The RuneScape Wiki also has an article on: rsw:Rag and Bone Man/Wish list 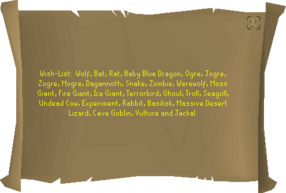 Below is the list of monsters that need to be killed to obtain all the bones (27 total).

Note: These monsters can be found in other places; listed are the most convenient spots.

Items: Slash weapon (sewer webs)
Travel method: Edgeville can be reached by using an Amulet of glory teleport, fairy ring, using Home Teleport (with the Ancient Magicks spellbook active) and the canoe system, by using Varrock Teleport and walking a short distance, or by using the Spirit tree in the Grand Exchange. The monsters are all found in the Varrock Sewers (Note: You will need a knife or other sharp object to cut through the spiderweb blocking the way to the Moss giant area if unable to use Agility level 51 shortcut near Vannaka). It is also a good idea to buy a mirror shield, some ice coolers, and several fishing explosives from the Slayer Master while you are here.

Items: Fishing explosive
Travel method: Minigame teleport to Port Sarim Rat Pits if you have completed Ratcatchers; otherwise, use an amulet of glory to go to Draynor and walk to Port Sarim. You will find seagulls on the docks. From there, travel south and look for the Asgarnian Ice Dungeon, where you will find ice giants. Travel south to reach the Mudskipper Point, home to the mogres. Alternatively, you can use fairy ring (code: AIQ) for the latter two bones.

Items: Ice cooler, waterskins.
Travel method: Use the fairy ring (code: DLQ) to get to the Nardah hunting area, and travel west. There are jackals on the way to the level 42 lizards. You need to use ice coolers on the lizards when their health is low. After these, walk south and go west from the Nardah bank to find vultures. If the vultures fly, you may need to use Ranged or Magic attacks.

Items: Ectophial (optional)
Travel method: Travel to Port Phasmatys (teleport using the Ectophial, or start in reverse order from fairy ring CKS) and travel west. The undead cows are just west of Ectofuntus, within the farm. Then, travel west and go under Fenkenstrain's Castle by pushing the easternmost memorial to find the experiments underneath (see the Creature of Fenkenstrain quest guide). Travel south-west to Canifis where many level 88 werewolves are located. They can be safespotted in the bar with a ranged or magic weapon. If you otherwise don't want to attack a level 88 werewolf, you can attack one of the level 24's in Canifis with Wolfbane, and when they are almost dead, switch to another weapon. They will change into a werewolf with low life points and may drop the bones. Finally, travel south-west towards the Paterdomus temple entrance to find ghouls.
Another way to reach Morytania is using Kharyrll Teleport from Ancient Magicks or POH portal.

Items: Inoculation bracelet
Travel method: Travel to Feldip Hills using fairy ring (code: AKS), the Castle Wars minigame teleport, or Gnome glider from the Gnome Stronghold. There, you will find ogres and wolves. From there, travel using fairy ring (code: BKP) and then travel east to Jiggig (south of Castle Wars) to find zogres. Zogres are located within the Jiggig tomb, and may inflict disease upon the player. The Inoculation bracelet will counter this effect; just be sure to keep it equipped all the time, or if you have completed Zogre Flesh Eaters, you may buy Relicym's balm from Uglug Nar if you opened his shop after completing it. Another option to counter the disease is to go to the Clan Wars Arena and jump in and out of the free for all portal. The zogres also have an incredible 80% immunity to most weaponry; therefore, it is advisable to bring along an ogre composite bow and brutal arrows.

Items: Games necklace, enchanted lyre, mirror shield, Glarial's amulet (if you haven't completed Waterfall quest), rope, good armour, good food.
Travel method: Use your Enchanted lyre to teleport to Rellekka, take a boat to Miscellania (or if you have access to fairy rings, use code: CIP), and kill some of the rabbits hopping about in the forest. Alternatively, there are rabbits located south-east of Rellekka by the Swaying tree. Then, head into the Fremennik Slayer Dungeon (AJR or Slayer Ring). It is strongly recommended to bring along a mirror shield when combatting basilisks. Without one, they will reduce your stats to a critical and irritatingly low point.
Next, pay a visit to the Lighthouse (ALP), north of the Barbarian Outpost. Dagannoths are found within the basement. Good food and armour is suggested, as these dagannoths are aggressive, and the area is a multi-combat zone. Grab a rope and Glarial's amulet (not needed if Waterfall quest completed), and then use your games necklace to teleport back to the Barbarian Outpost. Travel south towards the Baxtorian Falls, board the log raft, use your rope on the rock and then on the dead tree, equip your amulet and enter the Waterfall Dungeon. Fire giants can be found in the north and north-west passages.

Items: dusty key, anti-dragon shield.
Travel method: Travel to the Gnome Stronghold, either via Spirit Tree, gnome glider, slayer ring or a Royal seed pod. Terrorbirds can be found within the stronghold in large numbers. Travel to the terrorbird pen to the south-west (across the bridge, near a tree icon). The mounted terrorbird gnomes sauntering throughout the area will not drop the bone. Killing a terrorbird in the pen is an easy task in the Western Provinces Achievement Diary. Use the gnome glider to travel to the Wolf Mountain, and walk east towards Taverley. You may also use a games necklace to teleport to the Burthorpe Games Room, for quicker transportation. Baby blue dragons are found in the Taverley Dungeon, past the scorpions, chaos dwarves and lesser demons, or past the pipe near the entrance (requires 70 Agility). Reminder: bring the dusty key, if below 70 Agility as it will be required to unlock the gate leading to the blue dragon area. Bringing an anti-dragon shield or anti-fire potions is advisable, as the mothers are in proximity and may attack the player.

Without Trollheim Teleport
The easiest other area to find trolls is by the entrance to Keldagrim. It is located close to a fairy ring (code: DKS). Simply walk there from Rellekka if fairy rings are not an option. The trolls are located just south of the entrance. Mountain trolls work just fine.

Items: Light source (preferably lanterns), Spiny helmet (or Slayer helmet) (optional)
Travel method: Home teleport to Lumbridge. With a lantern, climb through the hole in the kitchen's cellar, and walk south and squeeze through the other hole. Go south towards the area full of rockslugs; then, head east towards the goblins. Cave goblins are found at the far east of the Lumbridge Swamp Caves. You may also take the entrance in the main spot and find them, although you'll need a Spiny helmet. By following Kazgar in the hole in Lumbridge Cellar, you will get near the entrance of Dorgesh-Kaan, where Cave goblin miners and Cave goblin guards will also drop the skull.

Note: You do not have to bring all the bones to the Odd Old Man at once.

Once you have collected the bones or while you are nearby collecting the bones, go to Draynor Village, and talk to Fortunato (found by the market square) there. He will be able to sell you some jugs of vinegar for 1 coin each. Note: Do not steal from the market stall or he will not talk to you for a while. After you buy 27 jugs of vinegar, talk to the Odd Old Man for further instructions. 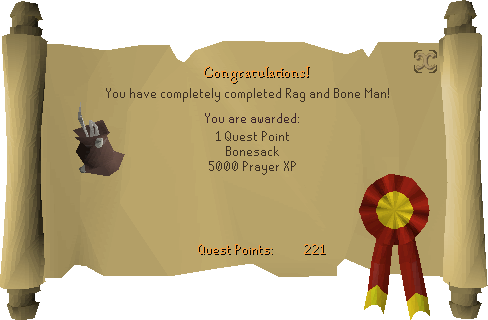 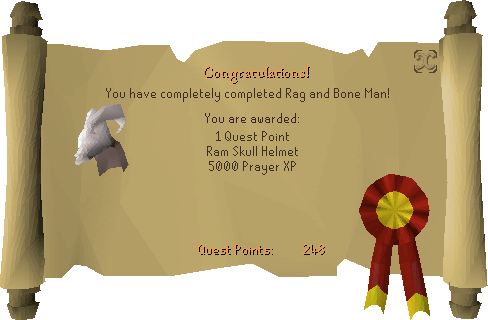