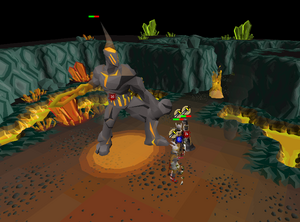 A group of players fighting together in the Chambers of Xeric raid.

Raids are high-level group activities in which the goal of players is to make it to the end of a set number of encounters, where they fight an extremely powerful boss before obtaining their rewards.

Raids scale based on the teams' skill and combat levels in the required skills, which in turn determines the resources appearing (Chambers of Xeric) and strength of the bosses (both raids).

They can be identified with a brown star

icon on the map.

There are currently two raids, the Chambers of Xeric and the Theatre of Blood. A third raid, Tombs of Amascut, is set to release on August 24, 2022[1].