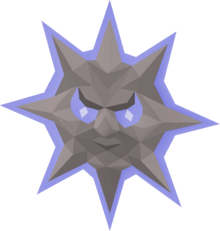 A depiction of Ralos found in the Crypt of the Moon within the Forthos Dungeon.

Ralos is the god of the sun and brother of Ranul, the god of the moon. Ralos is commonly worshipped by the people of Kingdom of Varlamore. Little is known about Ralos; he is said to have been born from a giant burst of light before the world began.

Followers of Ralos follow a general positive outlook on life; their tenets include being bold and honest, living life to the fullest by committing to their goals during the day and striving to work against those who would spread negative emotions to others.