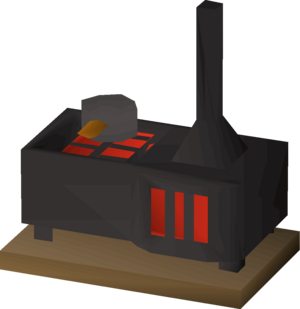 icon. Several other objects such as clay ovens and Sulphur vents can serve the same function as a range.

Cooking on a range reduces the burn chance for certain foods. The range in Lumbridge Castle (referred to as the "Cook-o-matic 100"), which requires completion of Cook's Assistant to use, has an even lower burn rate for certain foods. Lastly, the clay ovens in the Hosidius Kitchen give the best reduction in burn rates, providing the player has obtained 100% Hosidius favour.

For players training Cooking with a low Cooking level, ranges can come in handy, especially the ranges within chicken farms. A common tactic would be to collect as many raw chickens as possible (which are commonly left behind by other players, who kill chickens to collect their feathers), and cook them in the range by selecting "cook all". A good place to train at low levels is in the Champions' Guild. You can easily kill chickens, cook them, then sell them upstairs.

It is highly recommended to use a Range over a Fire, as it will greatly reduce your burn rate, and thus increase your experience gained. Even better is to use the range on the ground floor of Lumbridge Castle, the Cook-o-matic 100, after completion of Cook's Assistant.

The best place for levelling cooking is the bank chest in the Myths' Guild, which requires completion of Dragon Slayer II. The range and bank border the same tile, meaning no walking is required to cook at this location. Another area, which has lower requirements, is in the Cooks' Guild. This requires the completion of the Varrock Hard Diary in order to access the bank. The range there is right next to the bank, so the time between banking and cooking is only a tiny bit slower than at the Rogues' Den Fire in Burthorpe. The time lost is more than compensated for, however, by the reduced burn rate when cooking on a range.

If you do not have the requirements for the Cooks' Guild bank area, the second best place to level cooking is in Hosidius Kitchen. You require 100% Hosidius favour to use the clay ovens here, but there is a bank only 6 spaces away, and it also provides a 5% lower burn chance.

When cooking certain fish, you should always be wearing the Cooking gauntlets, a possible reward from the Family Crest quest. These gauntlets significantly decrease the likelihood of burning lobsters, swordfish, monkfish, sharks and anglerfish.

Range distances from a nearby bank[edit | edit source]