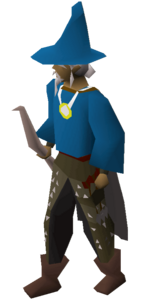 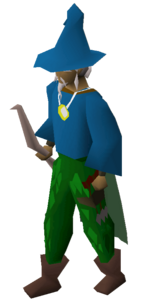 A ranged-magic hybrid is a type of low level free-to-play combat pure account that focuses on magic and ranged combat styles.

Since melee attacks are underwhelming in terms of damage early on and lack the extra range of other combat styles, this build is often followed by pures in low level clans trained to fight in multi-combat areas. These pures also tend to have relatively low hitpoints levels, since magic and ranged can be reliably trained without getting hitpoints experience, and melee combat skills can be neglected without an effect on the damage output.

magic without restriction. To optimize the combat skills on any given combat level, both ranged and magic should be trained to an equal level.

Due to their lack of magic accuracy penalties, using the leather chaps or the zamorak monk bottoms at all times might be preferable to the studded chaps and the green d'hide chaps. However, studded and d'hide chaps are still worth consideration for their notable ranged accuracy and magic defence bonuses.

Ranged-magic hybrids can use their rapid ranged attacks to wear the opponents down and the best available combat spells to knock them out. While not as effective or difficult to heal against as ranged-to-melee combo in general, this combination can be deadly in early combat level brackets where magic can still outdamage other combat styles.

These pures become less and less relevant in 1-vs-1 combat as melee catches up to magic and becomes the primary style of knockout attacks. With a max hit of 16 with Fire Blast at 59 level, magic lacks the damage progression in higher combat level brackets. Eventually, even regular ranged attacks with a maple shortbow and adamant arrows can deal over 16 damage in a single hit with a much faster attack rate, making this build entirely obsolete for duels.

Magic attacks have higher maximum hits and a notably longer range of 10 tiles. Due to their high damage potential, they allow to stack more damage in short periods of time in multi-combat areas when multiple clan members focus on a single opponent, and are excellent for hit-and-run tactics. Binding spells such as Bind and Snare are also extremely useful, as they allow to break formations of the opposing teams, and separate opponents from their clans.

Ranged attacks are faster and more accurate in general, although they have a shorter attack range. While this is not always true on lower combat levels and against armoured opponents, ranged attacks offer higher damage-per-second rates as a rule of thumb.

Some pures choose to train prayer to access the protection prayers and boosts such as the Eagle Eye.